KAREN KHACHANOV: “I TOOK ALONG MY WIFE AT LONG LAST!”

— Karen, how important is this victory for you? You won your first ATP match in St. Petersburg and afterwards you were not lucky while playing here. Can you, please, evaluate from the tennis point of view what you did to outplay your opponent?

— In this case I knew what I should do. I tried to compose myself and to prepare the tactics.  I knew I shouldn’t be rushing points because the court is slow, it means there is an opportunity to play aggressively and don’t take too many risks. I knew he has a good serve and I needed to play consistently on my return and to keep on searching for his weak sides during the rally. I also knew the longer the rally the better it is for me. So, this tactic worked for me well today and led to victory.

— What do you think about your next opponent Aslan Karatsev? Do you know anything about him? What makes him dangerous? What are you expecting from the match?

— Any opponent is dangerous, that is why I will prepare for the match seriously. It seems to me we haven’t played each other before or maybe we could face each other at challengers – to be honest I don’t remember. We were playing the same tournaments 3-4 years ago and he was close to his Top100 back then but then he got injured. I haven’t seen him play for a long time. But this year I saw his last results that he achieved during the pandemic. He played well at several challengers and now he is close to the Top100 and he is a strong opponent. We will make an analysis of his game and I will prepare for the match.

— Lately your tennis became more physically powerful. How tough do you think it is to keep the highest level of your physical shape?

— I think either the fitness factor, the game and its elements as well as phycology are important in tennis. Mental training are very important. I will say it accounts for 50% of your success.  If you are playing a Grand Slam match out of 5 sets physical shape is very important. Sometimes three-setters also can be long but on hard courts they are most commonly a little bit shorter.

— Is it right to say Novak Djokovic and Rafael Nadal set new standards of physical preparation? Do you watch other players doing exercises, and maybe you borrow some of them to include in your practice?

No one is doing its physical training during the tournaments. Usually everything is done at home before a tournament that is why there is no chance to watch.  Everyone is concentrated in what he is doing. It is tough to guess who needs to do what in terms of fitness training. I think everyone has his own game style, body constitution and you should search what is best for you specifically.  When I was playing Rafa Nadal at the US Open for 4,5 hrs, I can’t say he was fresher than me, so to be honest I don’t know what to say… This year I had three matches in Australia in a row: 3,5 hrs, in a day 4 hrs 40 mins and in a day 4,5 then. For sure I was a little bit broken before the next round even if I had beaten Nick Kyrgios. Nadal and Djokovic are physically well prepared, no doubt about it.  I know how they achieved it but they are both good in this component of the game.

— There are no Russian players in the Top100 besides you, Andrey and Daniil. At this tournament you, Evgeny Donskoy and Aslan Karatsev are in R2. Maybe Safiullin will manage to reach R2, too. Do you think it is just a lucky coincidence or they are ready for a breakthrough?

Evgeny Donskoy has already been in the Top100 many times, he has ups and downs during his career. But I’d evaluate the level of his game as Top50. In my next match I am playing Karatsev. Now he is very close to top100, it means is level is high. I should say all the guys have high level. Everyone who is the Top300 can hit the ball professionally, everything depends on where you can send this ball at this particular moment and who becomes the winner at the end of the day.

— Evgeny Donskoy came together with his wife and his younger son ton the tournament. Who came to support you?

— Yeah, my wife came with me. Finally, we managed to come together to a tournament. Now it is not the easiest time for travelling together due to some restrictions.  My son stayed in Moscow. My sister came to the tournament, too. So, my sister, my wife and my team are here with me. 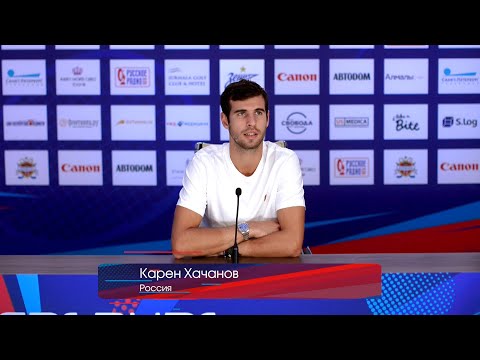