DENIS SHAPOVALOV: “I WILL ALWAYS CELEBRATE VICTORY DAY; I HAVE VERY WARM FEELINGS FOR THE RUSSIANS, FOR RUSSIA AND ST. PETERSBURG”

What went wrong today? What didn’t work out? It looked like the match went wrong from the very beginning … What attempts have you made to turn the tide of the match?

It was a very tough match today. He played really good at the very high level. I had a hard time getting into the match; I’m still a bit jetlagged. I think the schedule is pretty tough with my jetlag – playing first and playing last, playing earlier again, so it’s back and forth all the time. I wasn’t really able to adjust well with my body throughout the week. I had a slow start and it’s tough to come back in the first set when you are playing such a big server like Struffy and the second set was just too good of him. That’s pretty much it. I just run out of time.

There was a guy who was screaming in Russian from the stands: “Never mind, Denis, just keep fighting, it’s tough, but you can make it”. Did you hear that?

Yes, I heard it. I appreciate the support. I thought I fought, I did everything I could, but it was too tough. It was too good of Struffy. I do appreciate the support not only from that specific fan specifically, but from all the fans – I think they all were trying to cheer me up and get me back into the match.

What tactics did you have to win against such a server like Struff? You’ve already played against big servers on tour, like Reilly Opelka and John Isner. What tactics should you follow with these players? Or were you having problems due to a jetlag and nothing worked at all?

It’s tricky, because it’s different against John or Reilly. Today Struff was very solid from the back, he was pretty difficult and he outplayed me from the back. If he continues like this, he will be in Top-20 or Top-10 in the world with the way he played today. It’s tough to do something in the situation with how he played. I think he played exceptionally throughout the match. Obviously, my slow start gave him a lot of confidence. I can’t start like that especially with a server like him, but credits to him, he played amazingly.

On May 9 you congratulated all Russians on the Victory Day with a post in social network. We did appreciate that. There is some opinion from one Russian blogger (Morgenstern) who argues that the Russians should stop celebrating the Victory Day, because it was a while ago and we got to move on. What do you think about it?

I think it’s extremely important to celebrate it. The Russians freed the word from the Nazis and many families got torn up, because of that war not just Russia, but everywhere. And it was difficult also with my family: the body of my great-grand-father was lost somewhere outside St. Petersburg (then Leningrad). He perished somewhere and vanished and they never found his body. It’s very touchy for every family not knowing whether your parents, your loved ones are going to come back. I don’t think it’s a questionable thing, I believe we need to celebrate Victory Day. I will always cherish it, as it’s a big part of my history and that’s why I feel so warm for the Russians, Russia and St. Petersburg. 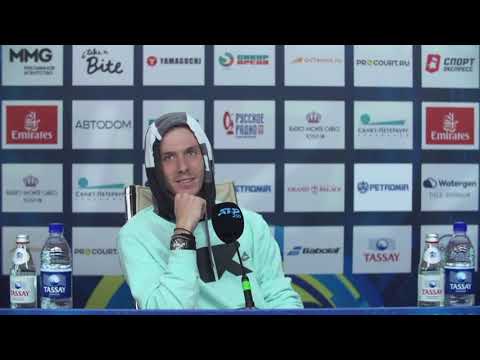 Press-conference with Denis Shapovalov, St. Petersburg Open 2021
29.10.2021, 16:40 #spbopen2021
More news
SHOTA MIRILASHVILI, CEO WATERGEN RUSSIA: «The exquisite elegance of tennis is associated in full harmony with our company!»
BOTIC VAN DE ZANDSCHULP: «I HOPE RUBLEV WILL REMEMBER ME NOW»
MARIN CILIC: «I STILL HAVE THE ENERGY FOR THE SEMIFINALS»
ANDREY RUBLEV: «BOTIC PLAYED A GREAT MATCH AND WAS AT HIS BEST WHEREAS I JUST PLAYED AS USUAL AND IT WASN’T ENOUGH TO WIN»
JAN-LENNARD STRUFF: “I’D LIKE TO FLY OR TO MOVE THROUGH SPACE ON FLICK”
Share with friends!