On Saturday, October 23, the draw ceremony of the 26th International tennis tournament St. Petersburg Open 2021 was held at the SIBUR ARENA. This year the ceremony was broadcasted online via the tournament’s YouTube channel. It could also be watched on a special screen in the spectators’ area. Valeriy Lutkov, the tournament referee, traditionally moderated the draw ceremony; he described the official procedure and introduced all the participants’ and mentioned their achievements.  He also named the three wild card owners – the tennis player from St. Petersburg Evgenii Tiurnev, the Croat Nino Serdarusic and Yshai Oliel from Israel.  Boris Piotrovskiy, vice-governor of St. Petersburg, Alexander Medvedev, director general of St. Petersburg Open and the tournament’s director Natalia Kamelzon, and the Russian tennis player Evgeniy Donskoy were assisting Valeriy with drawing the chips.

Alexander Medvedev made a speech: “Despite all the difficulties, we are glad that the tournament will be held. The tournament’s lineup is very strong: our heroes of the Tokyo Olympics will come – Andrey Rublev, Karen Khachanov and Aslan Karatsev. The fans’ favorite Roberto Bautista Agut and the Canadian professional Denis Shapovalov. St. Petersburg Open is taking place right after the Kremlin Cup which allows the players to get easily from Moscow to St. Petersburg. We obtained the permission from Rospotrebnadzor agency to fill the stands at 30% of the stadium capacity and that is quite important in such an uneasy period of time.  We are waiting for spectacular tennis! And we wish everyone to show good tennis!»

The top seed of St. Petersburg Open 2021 and reigning champion Andrey Rublev (1) will play his opening match against Laslo Djere or Ilya Ivashka.

Denis Shapovalov (2) from Canada, the second seed of St. Petersburg Open 2021 will compete with Federico Delbonis or Pablo Andujar. The titled  tennis player from Spain Roberto Bautista Agut (3), who was playing in the semifinals of St. Petersburg Open 4 times, will take on a qualifier or Mackenzie McDonald from the USA.

In his R1 match Karen Khachanov (6) will face the French Adriano Mannarino, and the fourth seed Aslan Karatsev who has a bye will vie for a spot in the next round with the winner of the clash John Millman (Australia) vs Yshai Oliel (Israel).

The other pairs of contenders look as follows: 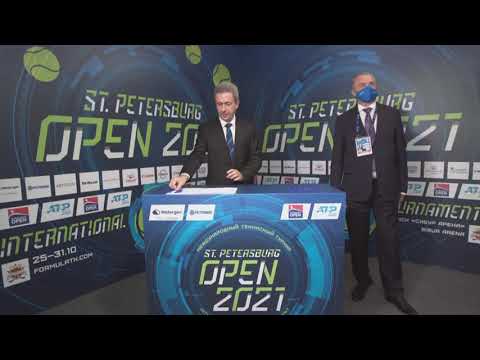