JAN-LENNARD STRUFF: “I WANT TO COME BACK HERE, IT IS A BEAUTIFUL TOURNAMENT”

Jan, you were playing a very solid first set, you were pumped up, you were coming to the net playing good volleys and then what happened? You kind of lost the momentum, there was a blip of attention or he just raised his game?

I think, it was a very close first set. He broke me first and I stayed with energy inside set. He made some errors at 5/5 and I was there, and served it out 7/5.  I had the feeling I was pretty pumped at the beginning of the set, like you have said, and I played well aggressive tennis. But I think in few games there was one mistake more I can let myself. And he played very well. He broke me very well. He didn’t give any chance to get back in the set. He won 6/1 in the second set but it felt closer. I mean, for me it felt like 6/3 or 6/4…One break should be okay but it was 6/1 on the score board. It is very-very tough. And in the 3rd set he put a lot of pressure on me I have to admit for me it felt like I saved the game to be 2/1 down, it could have been 3/0 up for him. He was playing very well. And in the third set, I made two forced errors and the rest he played pretty well, I need to say. He deserved to win.

You played a pretty solid tournament, you reached semis for the second time here. Obviously, it is sad to lose not being able to make it to the final. But what are the positives you bring home from the tournament?

Yeah, definitely. I’d love to play the finals tomorrow. 100%. For me, I had tough months of tennis, I wasn’t playing the best tennis, so I felt like I found here my game again like I played I won three matches which hadn’t happen since French Open. And for me, even if I lost today, it is a very positive week. So, I can take and look at the match today and find some little things that were not really good but I need to let them go and say ‘It was a good week for me’. I need to focus on the last couple of months that were not that great. This week is very positive. And I am very happy.

What are your plans for the rest of the season and will you come to St. Petersburg Open next year?

Yeah, I have Paris next week, ATP Master which is a big tournament. And it will be the last tournament for me this season. And then we have the Davis Cup final. I play for Germany. And I am very happy about this. Yeah, I want to come back to St. Petersburg, it is a beautiful tournament, a beautiful city. I like to play here. 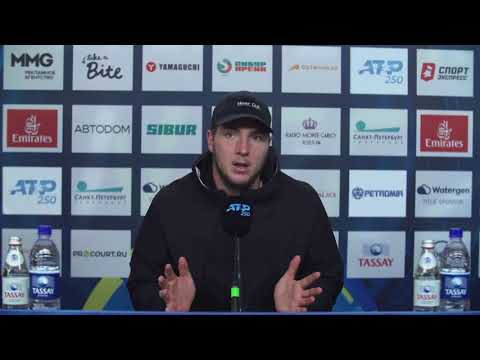