JAN-LENNARD STRUFF: “TODAY I WAS VERY CONSISTENT ON RETURN”

Denis Shapovalov has just been here and he said he had a slow start against such a powerful server like you, and he said it is very dangerous to have a slow start of the game. So the question is how important is it for you to have a quick start and to take the initiative right from the beginning?

Indeed, it was a very good start for me. Last time when I played him he came to the match very pumped and motivated and had a good start. So this time I knew especially after my first round match against James Duckworth went down 2-0 in the break that I needed to be very focused from the  beginning. So I was very focused and Denis made some errors in the beginning which I managed to convert the break then to go up two brakes and though in the end he almost threw me off I still managed to win.

You said on the court today that your return was exceptional, can you return even better or is it the top of your technique?

I played a lot of returns throughout the match which is very important. I can return faster but then I will lose consistency. This is what is important here, letting the server play every ball and returning them back in the game not being faster.

Last year you had the highest ranking in your career, but it looks like this year you are playing your career best tennis. Would you agree with this?

This week I am playing very well, I would say. Looking back from Wimbledon I was not playing that great, I have to admit this was not the best performance. For the last few weeks I was looking for ways of playing better tennis and this last week I am playing better for sure. I reached the finals in Munich which was very important for me and I played 4th round at Roland Garros. And I must say I am playing quite well in St. Petersburg, in 2017 I played in the semifinals here and in 2018 I lost to the future champion Dominic Thiem, so I always play good tennis here and I am very happy to return.

What are your expectations from the semifinals because you have beat your opponent Taylor Fritz before?

I beat him in the second round at Wimbledon, it was a very close match, I played really good tennis there. But he won the week before in Nottingham tournament and he is coming from a very good Indian Wells tournament. He is playing very decent tennis now, so it will be a tough match in the semifinals.

We noticed that on your Instagram account you put “proud dad” on the profile. How did the birth of your child affect your life? And maybe you are noticing a capacity for sports in him?

It changed my life completely. For my girlfriend and me it was the happiest day when he was born. It gave me a bit more consistency at home and for my livelihood. Sometimes they are joining me for tournaments, but as now it is the end of the year it is not possible. I think it is very important for children to do some sport, some activity, so I will be supporting him if he decides to take any sport – be it tennis or soccer or something else.

We have a live jazz band playing during changeovers. Have you noticed it and what music do you associate tennis with?

Good question! I saw the band walking in the court, I saw it during the match when Fritz played and I saw that they are playing during our match. I like that here at St. Petersburg Open there is live music played between changeovers, I think it is nice for the fans and for the players. As for the music that I associate with tennis, it is very tough to say, because I like a lot of different music. 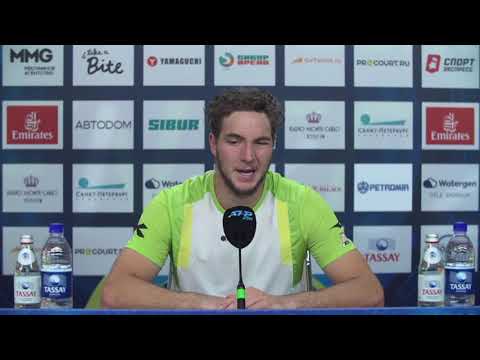 Press-conference with Jan-Lennard Struff, St. Petersburg Open 2021
29.10.2021, 17:00 #spbopen2021
More news
SHOTA MIRILASHVILI, CEO WATERGEN RUSSIA: «The exquisite elegance of tennis is associated in full harmony with our company!»
BOTIC VAN DE ZANDSCHULP: «I HOPE RUBLEV WILL REMEMBER ME NOW»
MARIN CILIC: «I STILL HAVE THE ENERGY FOR THE SEMIFINALS»
ANDREY RUBLEV: «BOTIC PLAYED A GREAT MATCH AND WAS AT HIS BEST WHEREAS I JUST PLAYED AS USUAL AND IT WASN’T ENOUGH TO WIN»
JAN-LENNARD STRUFF: “I’D LIKE TO FLY OR TO MOVE THROUGH SPACE ON FLICK”
Share with friends!