On September 16, in the ball-room “Monferran” of Four Seasons hotel the traditional players’ party took place – it was funny, scintillating and refreshingly dynamic: a special award ceremony for the players of the main draw “St. Petersburg Open Awards” was the highlight of the soiree. Organizers came up with creative and witty nominations putting a fresh touch on this traditional must function at every tournament.

The first prize was awarded to Joao Sousa for “Unparalleled loyalty to the tournament”: the Portuguese comes to the North capital of Russia for the 5th time, he showed his best result in St. Petersburg in 2015 becoming runner-up .The Russian Karen Khachanov was invited on stage for getting the prize in the nomination “Daddy of the Year” – on September 14 world number 9 in singles ranking became a father, his wife Veronica gave birth to their son. “Daddy” was awarded by Vladimir Kamelzon (member of the board of directors and Honored coach of Ukraine and Russia), who wished the Russian to make his fans happy with such good news and good tennis results. Quite naturally, the organizers couldn’t leave without attention Daniil Medvedev, world number 4 who played four consecutive finals from July till September and was very close to beating the legendary Spaniard Rafa Nadal in the US Open 2019 finals. His namesake Alexander Medvedev, director general of the tournament St. Petersburg Open and St. Petersburg Ladies Trophy, director general FC Zenit, adviser to directorate general LLC Gazprom export handed out to the top seed the award in the nomination “Russian sensation”.

The 18-year-old Italian Jannik Sinner was celebrated as the “Rookie of the Tournament”. Andrey Rublev was named “Breakthrough of the Summer” as he beat such tennis stars as Cilic, Wawrinka, Federer, Tsitsipas and Kyrgios. The chair umpire Gianluca Moscarella, who is working at his fifth consecutive St. Petersburg Open got his prize for being  «Strict but fair». Moscarella’s colleague Valeriy Lutkov, who is working as the tournament referee for the 21th time was praised for being the “Themis of Tennis”. The special prize for “Comfort &Hospitality” went to the general manager of Four Seasons Hotel Lion Palace St. Petersburg Felix Murillo. Canon showed its «Unparalleled Loyalty» to the tournament (the prize was picked by Innokentiy Pan). Andrey Olkhovskiy, General Director of Branch Management in St. Petersburg of AVTODOM company (automobile partner of the tournament) received the prize in the nomination  “Expeditious Delivery”. The title sponsor of the tournament – LLC Gazprom export – was praised for its “Rock-solid support”.  Finally, Alexander Medvedev, general director of the both tournaments in St. Petersburg, received an award for “Life-time contribution to sport and tennis” and, logically enough, received his prize from his namesake – the leader of Russian men’s tennis Daniil Medvedev.

As always, the guests appreciated the wit of gala-dinner MCs – the charismatic and artistic Alexander Belov and former professional tennis player Anastasia Bukhanko ( TV host of the program “It’s tennis time). The atmosphere of the evening was spiced up by the DJ duo TWIN PROJECT, the most popular and media popular DJ-gymnasts, in the opinion of Playboy Russia. No one was left in indifferent after their performance; it gave people lots of unforgettable emotions. Olga Veber, the soloist of VEBER LIVE put up an amazing windup performance winning over the audience with her unique black timbre and a 3,5 octave strong voice. 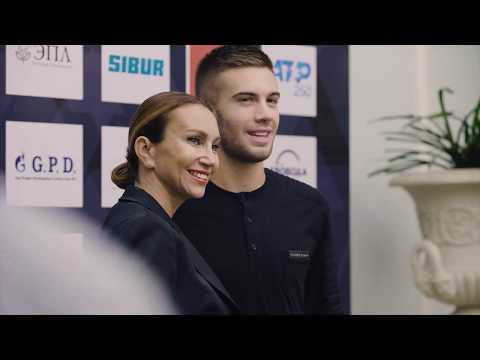