TAYLOR FRITZ: «I PLAY MY BEST TENNIS EVER!»

Can you give a short summary of the match against Jan-Lennard Struff?

Obviously, I got off to a good start. I started up a break and then I had some issues, double-faulting a little bit, some chances got away from me. I had another second serve on a break point, missed it and so more double-faults? I got broken again. A couple different things just didn’t go my way in the first set and it was frustrating, but I kind of cleaned it up and played better in the important situations in the second and third sets. That’s what I needed to do.

Struff at least in the first part of the match was trying to be coming in, play more volleys at the net. Were you ready for that tactics?

I was ready for him to be coming to the net. He does it very well and it something that he does often. I was ready for that, but it took me a little bit to get used to it and figure that out. I hit some pretty good lobs, some good passing shots. And as the match went on I felt like I dealt with him coming forward better.

Could you, please, tell us, who is accompanying you at this tournament? We can see some people in the stands cheering for you.

So I have here my girlfriend Morgan, my physio – Wolf, my coach with me this week Michael Russell and Lilly, who is Michael’s wife.

In the previous match, when Shapovalov lost to Struff he was complaining of the jetlag factor. You were in pretty much the same situation, you also flew from America. Did you feel any jetlag and how in general do you cope with jetlag when you are traveling?

I was in Dubai before this tournament for a couple of days, so the time difference was only an hour. I felt like I came here and I was fine. Typically jetlag doesn’t hit me too badly, as long as you fight through the first days then you get over it. I’m not sure how long Denis was here beforehand where he came from, but for me going to Dubai for an event last week I think gave me a couple of extra days to get to the right time zone.

The final match is a special match. Do you have a special routine to prepare for the finals? Or do you just prepare for it the usual way?

I’m going to take it as any other match. I’ll just give everything I have. I keep the same routine that I have this week – whatever I’ve been doing before I’ll just keep it up.

What do you feel about a jazz-band playing live during the changeovers? What kind of music you typically listen to?

How come that with such a game you are showing, which is effortless and very efficient at the same time, your best career ranking was 24? It seems like you are playing like a Top10 guy this week hands down, would you agree? How can you explain that you haven’t reached the heights that you could have reached with this tennis?

Well, I think that this week especially and in Indian Wells as well I’m putting it together doing all the right things. So, I think I’m playing my best tennis right now and the ranking would come along hopefully. I’m obviously looking to finish this year strong. I think the next year is going to be very big for me, because I’m finally putting everything together. I felt like I was doing it when I was ranked 24th, because I’ve just made it to the finals in Acapulco, I was playing really well and I was going to be seeded in Indian Wells and Miami. And then we went into lockdown and COVID broke out, the tour stopped. I think the pandemic really kind of disrupted the momentum that I had. I was really like now putting it together. When we came back it changed a lot of things with the rankings. Obviously, I lost my momentum, but I’m finally again in my best shape and play my best tennis ever. 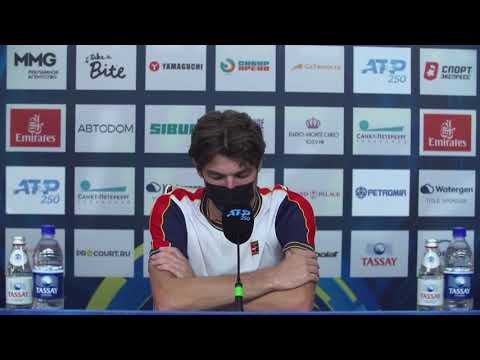 Press-conference with Taylor Fritz, St. Petersburg Open 2021 / 30.10
30.10.2021, 17:00 #spbopen2021
More news
Press-release on the change of status of the tournament St. Petersburg Open
MARIN CILIC: “WINNING HERE FOR A THIRD TIME WOULD BE A DREAM COME TRUE”
TAYLOR FRITZ: «MY SERVE LET ME DOWN TODAY»
MARIN CILIC CLINCHES CAREER 20TH TITLE AND THE SECOND ONE IN ST. PETERSBURG AFTER 10 YEARS
JAMIE MURRAY SERVING AND BRUNO SOARES RETURNING – A DEADLY COMBINATION!
Share with friends!