TAYLOR FRITZ: «I AM PLAYING THE BEST TENNIS IN MY ENTIRE CAREER»

Let’s talk about that famous rally in the first game of the second set that didn’t work for John. It seemed like either he hit the ball with the frame or you were closer, but he had an opportunity to put the ball away yet didn’t manage to do it. What happened?

I think he just smashed too hard, so then the ball just bounced up really high and it gave me extra time to get there. It might have been the frame but what allowed me to win this rally and the match was that the ball bounced up so high.

You are going to play Shapovalov or Struff, and you are 1-4 down against Shapovalov and 0-1 with Struff. They are completely different opponents. Struff is a powerful server with solid forehand and a pretty straightforward game. And Shapovalov is a fine technician, playing a varied tennis. What do you say about each of them?

I think they are both very powerful players. I am playing really well right now, maybe the best I have ever felt playing tennis on the court, so I don’t really care who I play. I am going to rest up and make sure that I am feeling as good as I possible can for tomorrow. And I will try to play as I have played my last three matches.

It is your 6th semifinals this year. What do you have to do to reach the final?

I have to not think too much about it being in a semifinal and play it as I have played all the other matches. I have produced a pretty high level so far in this tournament throughout my first three matches that it should be enough to potentially get me into the final. If I will be able to play like that then I would reach the final.

In a career of every tennis player there is a tournament that would propel him to a higher level. In your case it must be Indian Wells where you have beat Berrettini, Sinner and Zverev. Do you think that the confidence you acquired there will bring you to a higher level and from now on you will be playing different tennis?

Yes, absolutely. Anybody who has seen me play in the last couple of years knows that now I am playing with much more confidence and hitting tougher balls, using my weapon so much more and finally playing the tennis I know I should have been playing for a long time. It feels really good to finally be where I am supposed to be in terms of the game.

Do you feel more confident? It seems that you don’t feel nervous on key points, you panic less and became more cold-blooded. How does it feel internally now?

That’s exactly how that feels. It feels incredible coming to the important key points of matches and being able just to trust myself, without second-guessing or worrying about things just to show up and play my best, hit my best shots at this kind of moments. That’s what I did very well when I was 17-18 years old kind of coming up on the tour. That’s what made me a very good player when I was younger. That cold-blooded feeling is finally back.

Yesterday you received a present for your 24th birthday on the court. Tell us in more detail what was presented to you?

It was these cups, almost like really fancy chalices in a briefcase. I will be carrying them around for a couple of weeks before we get home, but I’ll definitely have a drink from these cups, when the season is over.

At the very beginning of the match you didn’t get a good start, you dropped your serve and lost the game. We saw that you were talking to yourself and it was some king of a monologue with yourself. What are these monologues are all about? What do you tell yourself to tune in and calm yourself?

I don’t remember what I said, I was just probably complaining about what I did wrong. I didn’t come off to a good start and sometimes in that situations you start to put yourself down early if you are playing against someone very powerful or with a great serve. So I was probably just disappointed with myself.

You remind us a little bit of Leonardo DiСaprio, maybe it is something in your smile. Can you share with us what were your favorite movie stars or tennis idols?

First I would say, I like Leo he is amazing, and I have been told about the resemblance sometime before. And also I would name Bradley Cooper. As for tennis, I had couple when I was growing up, I would name Pete Sampras. And as I started going on tours and playing professional tennis Juan Martin del Potro and Roger Federer. 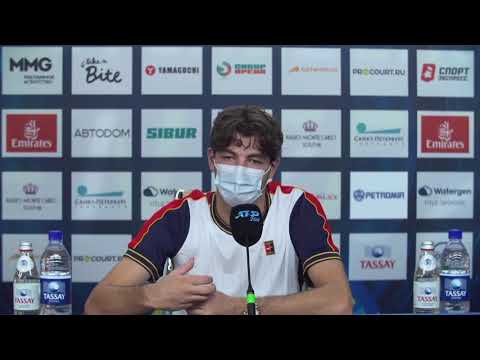 Press-conference with Taylor Fritz, St. Petersburg Open 2021
29.10.2021, 15:19 #spbopen2021
More news
SHOTA MIRILASHVILI, CEO WATERGEN RUSSIA: «The exquisite elegance of tennis is associated in full harmony with our company!»
BOTIC VAN DE ZANDSCHULP: «I HOPE RUBLEV WILL REMEMBER ME NOW»
MARIN CILIC: «I STILL HAVE THE ENERGY FOR THE SEMIFINALS»
ANDREY RUBLEV: «BOTIC PLAYED A GREAT MATCH AND WAS AT HIS BEST WHEREAS I JUST PLAYED AS USUAL AND IT WASN’T ENOUGH TO WIN»
JAN-LENNARD STRUFF: “I’D LIKE TO FLY OR TO MOVE THROUGH SPACE ON FLICK”
Share with friends!