STAN WAWRINKA: «SHAPOVALOV IS CAPABLE OF WINNING THIS TOURNAMENT»

What didn’t work when he was serving for the match – you had two break-points, he was down 15/40, but it didn’t work for you. Whatever happened?

I think in general he played a good match. He was leading the game, he was aggressive, and he is a tough player, playing super well, confidently. He just played better today. I had some opportunities to break him in the first two games to take the rhythm and get a bit better and have advantage at the beginning, but in general he was just better than me.

What tactics did you bring to the match against Denis Shapovalov? It seemed like on crucial points you were very passive?

I think I always try to play my game, to play aggressively, I try to dictate the game. But it didn’t work against him, because he is playing fast and heavy from both sides, he is putting down the pressure, he advances to the net, he is serving well, so you need to kind of adapt to change the rhythm a bit. On important points he was always aggressive, so it was tough for me to take any opportunities there.

What are you planning to work on to beat players like Shapovalov? What are your plans for the rest of the season?

I keep working with my team to try to improve my game in general. Today I played better. Hopefully it will be better for me next time. I have still a few tournaments to play: Cologne, Vienna, and Paris. I play as much as I can and I try to win more matches and finish the season well.

With the game he is showing, do you think Shapovalov is capable of winning the tournament here?

Of course, he can. He is a great player. It’s a strong tournament here, there are s lot of good players, and he is part of them. He has everything to win the tournament. 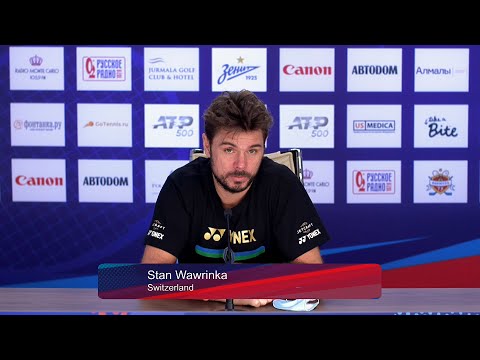