ROMAN SAFIULLIN: “I HOPE ORGANIZERS ARE GLAD THAT I WAS GIVEN A WILD CARD TO MAIN DRAW!”

— Roman, today you have won an important match at St. Petersburg Open 2020. Could you, please, tell us how did you feel during the match?

— The first three games were very intensive. Probably because of I was a little bit nervous as it is my first ATP500 tournament. Thanks a lot to the organizers for giving me this opportunity to play here. I hope, I don’t let anyone down and they are happy they handed me a wild card into the main draw of St. Petersburg open 2020. I think I was playing well especially in the second set as in the first one I was a little bit nervous, though it is OK for the opening match.

— How should you cope with your nerves in your opinion during the match? The fact that you were playing at home was an extra reason for being nervous?

— How does it feel to switch from clay to hard? How much time do you need to get used to new conditions?

— The first three-four days we were practicing with Andrey Kuznetsov and Evgeny Donskoy.  I felt well when moving. When I came to St. Petersburg, I felt myself even better on hard court than on clay. I feel myself more comfortable playing here.  This year it is like that.

— A question about Mikhail Bril, your coach.  Can you, please, tell us about your collaboration? How does it feel when your coach is also your good friend?

— We started to work with him in 2018. It was at the times when he was working with Konstantin Kravchuk. I asked them to work with me on a series of the tournament. And at the end it so happened that we pursued our collaboration and we were making progress. And for me it is the key thing. I see only advantages from this situation. I mean, the fact that we are close friends. We understand each other well and can say honestly to each other when we don’t like something. We can discuss anything.

—  How do you find yourself in 2020? Did you get used to the new realities, like living in a bubble for example?

— Living in a bubble is easy to get used to. The main thing that tournaments are held again. I remember in July all the challengers in jeopardy, it wasn’t clear whether they will held or not. Finally, the tournaments restarted. The year 2020 year is a tough one, but in general everything is good, and if I am not mistaken, I spent 5 months at home with my wife.  It was a good time and I hope there won’t be any restrictions anymore. So, I should just keep on working.

— Did you become closer with your wife in this period. Quarantine separated some people, what about you?

— Everything is good. During the quarantine we were closer together than even after the quarantine, we spent a month together. Today she is here with me in this studio.

— Do you feel safe here in St. Petersburg?  It is well known that the organizers do as much as they can to make players feel safe.

— Yes. Everything is well-organized. No questions about it. The court is washed with sanitizers in individual packages.  Everything is at the top level.

— How did you learn you were handed a wild card at ATP St. Petersburg Open 2020; how did you react?

— At first organizers handed me a wild card into the quallies that is why I came as all the players of the qualification draw on Thursday to prepare for the tournament: to make a COVID-19 test and to practice. And on Thursday evening Natalia Kavelzon (the tournament’s director) called me and said I received a WC into the main draw as Jannik Sinner entered the draw with his ranking.

— Wasn’t it nice to get a wild card into the main draw?

— Undoubtedly. It was a pleasant surprise.

— In your interviews you told you were working with different coaches: in 2015 it was the Croat Marin Bradaric, then Boris Sobkin and Mikhail Youzhny and now Mikhail Bril. What did each of them bring into your game? And what has become a key for your today’s  progress?

— Everyone brought something into my game.  But Mikhail Bril made it all work together. After I was injured in 2015, I was struggling to recover. I served without feeling any pain only in one year or one year and a half. I suppose that it was difficult for the coaches to get used to my case as they hardly had any experience of working with such kind of cases before. And we are working with Mikhail at any little thing. If something goes wrong or I didn’t feel myself comfortable, I share my thoughts and feelings with him and we are searching for a compromise so that it suits my game.

— Does it mean you started to listen to your body attentively during your practice to become injure-free?

— Yes, we included in my preparations more work with physio. I started to be more attentive to my body: if it gives my any signals, I listen to them. Before those injures there were no any signals unfortunately. They just happened all of sudden and that bothered me to no end.

— What do you think you need to crack the TYop100?

— Good question. I think, I should keep on working on each aspect of my game: my forehand, my serve, my volley, my backhand. It will help me to improve and to reach this goal.

— Did you have time to try something new for you during the pandemic self-isolation? Maybe now you have new hobbies… What did you do during the quarantine?

— Before the pandemic I bought купил Playstation, I haven’t had it before. And somewhere around a month I was playing it days and nights.  My wife wasn’t happy about this.  But now I can’t say I want to play it every time I come home. It doesn’t attract me. When the pandemic restrictions were shortened, I tried water type of sports: surfing, flyboarding.

— Did you play tennis on your Playstation or something else?

— Yeah, it was tennis. On some evenings we were playing together with my wife and coach. Also, we were playing football Mortal Kombat. There some other games but I don’t remember their names to be honest.

— Would you like to try any extreme sports in the future? Parachute jumping for example?

— To be honest I didn’t think of it. For sure, I like such kind of extreme things but it is too injury-prone, especially when you are playing tennis on the Pro level.

— What do you think about your next opponent, last year’s runner-up, the Croat Borna Coric?

— To be honest, I have no ideas, as I have just finished my today’s match 1h ago. Yesterday I managed to watch a couple of rallies.  Tonight we will study his game and come up with a plan.

— By the way, how do you usually prepare for the match? Did you watch any videos or make analysis with your coach?

— Sometimes my coach watches more video, sometimes me and we all together analyze them and discussing a game plan. But sometimes you are changing it during the game as you never know what your opponent will prepare: as yesterday he played another opponent and he chose another plan and tomorrow he is playing against you, so he also should change his plan. 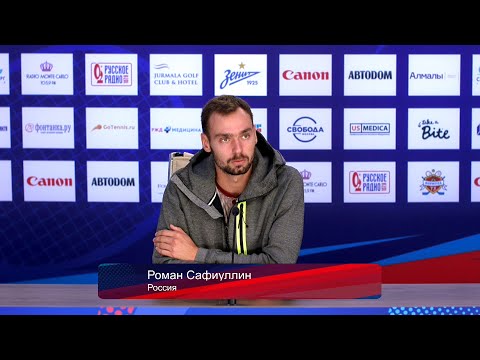