REILLY OPELKA: “IT ALWAYS TOUGH TO PLAY AGAINST GUYS LIKE DANIIL”

– After the first set seemed like Daniil would cruise into the quarterfinals round smoothly. What happened there in the second set?

– He is tough to play and I haven’t played a top player like that in a while. I’ve played only few matches against best players in the world this year: Goffin comes to mind, Berrittini. You have to make adjustments; you have to play out of your comfort zone, when you are playing a top guy like him. It took me a while to do that. Of course, some things really went my way. Drop shots that really saved me pretty much the entire match. It was tough, he makes you uncomfortable. I competed with him really hard.

– It seemed like not only the serve was your weapon, but also the drop shots. Did you train the drop shots specifically or just it’s just a natural feel for you and you feel the ball naturally?

– The drop shot is something that I’m always trying to throw in and incorporate in my game. I’m obviously having a big serve so guys tend to return from the fence like Daniil does. So drop shots are the good shots to throw in there to keep him honest a little bit. That way it allows me when I do want to set up and rip my forehand to keep him guessing. He can’t recover far back, he can’t get away with just being on the fence all the time. It’s a shot that I do work on a lot, something uneasy to incorporate as much, but given the circumstances as today it worked out well.

– Did you get to play Daniil Medvedev in juniors? How long have you known each other?

– Yes, I have played Daniil in juniors. I played him in Washington DC at the College Park ITF. He beat me in like three sets, but it wasn’t close. I think I got lucky back then to win one set.  I won like 7/6, and then 1 and 1 in the other two sets and it was over. So I’ve known him for a while. I’ve always been a big fan of Dany for a while before the US Open. I’m like most of the tennis fans. I’ve always been a huge fan of his game and I still am. He is one of the guys I watch the most, just because he is fun to watch. He doesn’t miss a ball, he compete harder than anyone. He is tough as hell.

– Are you getting along well?

– Yes, I’m getting along well with all the Russian guys. I played Rublev when I was 10 y.o. Anyone on the tour would say that Rublev is one of the nicest guy you can find.

– You teamed up with another Russian speaking player Alexander Bublik. Why did you team up with him? Was it just by accident? And the other question is -maybe Alexander prompted you how to beat Daniil?

– No, Bublik did not prompt how to beat Daniil (laughter). Bublik and I play nothing alike. I have known Bublik for a while. He trains a lot in Florida. I practice with him a lot. We have done a lot of off-seasons and trainings in recent years. He is always around. He is the fun guy to play doubles with. I don’t like to take doubles too seriously so he was a perfect candidate. I was actually supposed to play with Taylor Fritz. He wanted to enter with me, but he had already entered with Cameron Norrie and they got in. So I was scrambling around for a partner at the last minute. He (Cameron) kind a of got me good there, but it worked out well with Bublik.

– Not that long ago you made a home tour video for you instagram account. You were showing some paintings and canvasses hanging on the walls there. Could you tell about your collection of art?

I’m aware that one of the best museums is right here, and it’s tough, because I’d love to leave the hotel, especially having it in a very close distance from me.

– Would you come back to St. Petersburg next year to visit the Hermitage if the pandemic is over?

– I would absolutely love to do that. This is literally the tournament I wanted to participate in at some point of my career for that reason. Here we are and I can’t go, but I understand. So, I’ll do it next time. 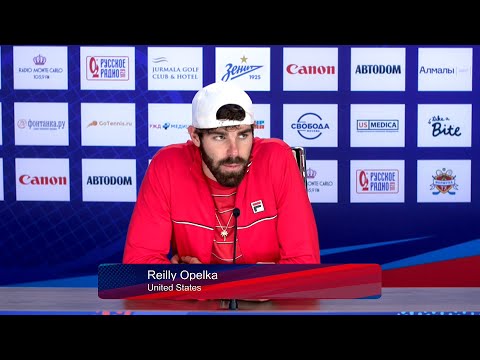