– Was it a perfect match for you? Because you fired 2 aces on average in every game, sometimes more. You were also returning unbelievably and the baseline game was almost perfect.

– Yes, I played really well. Karen has had a lot of success playing indoors, especially at home indoors, so I knew it was going to be a difficult task , I knew I had to bring my best tennis. I’m thankful it came through for me.

– Obviously it feels nice to win always, but aren’t you a bit bored to win with so many aces in the match?

– You are playing some great tennis, you broke him many times, you felt safe to use your forehand. How much are you satisfied with your movement on the court?

– That’s incredibly important for me. I’ve been thankful to be healthier for a longer period of time, where during the months-off I was able to work on my movements. If I can move well, if I can put in an aggressive position, this will give me the best opportunities to win. I’m thankful that those things are coming together.

– Can you compare yourself today with Milos 4 years ago when you were in the Top10, you were World №3. What’s missing in your game now to be at least as good as you were 4 years ago? Is it physical shape or something else?

– I think I’m physically good now. I think it’s the health. To be in the Top10 or Top5 you have to be at the high level the whole year. And you can’t do it consistently without being healthy. If I can do that I know I can bring the tennis at the level consistently high, but I need to have the freedom to train and to prepare to the best of my ability.

– Not that long ago you were considered to be the representative of the younger generation. Now you have the NexGen guys playing in the semifinals here. What do you think are your chances to withstand that competition with much younger than you players who are coming up?

– That’s a difficult question. It matters, but for me it doesn’t matter now. The most important thing is what level I can bring and if I can bring my best tennis to find the way to win tomorrow against Borna Coric.

– Looking from aside, you look pretty relaxed wherever you sort of communicate with a crowd or the way you look on the court. You always have been like that or it is the result of mental training?

– Yes, it’s a lot of training, a lot of attention is going to that. I was not best behaved junior and I did not really push my level of tennis to a high level until I matured a lot and I grew up. I was raised in Canada but at home we have a lot of Eastern European discipline. So when I would behave badly I was made aware of it. That’s something I knew I needed to improve a lot if I wanted to be a player that can play with the best tennis players in the world.

– What are your thoughts on Rafael Nadal’s victory at Roland Garros that tied Roger Federer’s all-time Grand Slam record? Do you have an opinion about the ongoing debate as to who is the best ever among the Big Three?

– It’s incredible what Rafa has done – to win the tournament 13th times in 16 years I believe. He lost only 2 matches and one year he was not able to compete in the tournament. Before these 3 guys started, the Grand Slam record was 14. He has a good chance to have 14 at one event. So who would have thought that was possible? In the long term debate I think it’s hard to debate it now because there a lot of open things. You have Rafa that’s going be around to play more tennis. We have Roger that’s coming back next year. You have Novak that’s maybe got age on his side and has been the definitely the healthiest of them. Especially over the last few years. It’s not only about Grand Slams. Weeks at No. 1 matters, head-to-head results against each other matter, how many times you win each Grand Slam those matters, how many Masters series you win matters. There is always going to be an argument about who is the greatest of all time. I think we are very lucky to be able to have that argument all in the same generation. You can compare these guys rather than  compare some players from now to players 20 years ago or to players 40 years ago. It’s a pleasure to have the guys in front of you all in the same time so that you can have this comparison.

– Are you going to take pity on Borna Coric when serving? 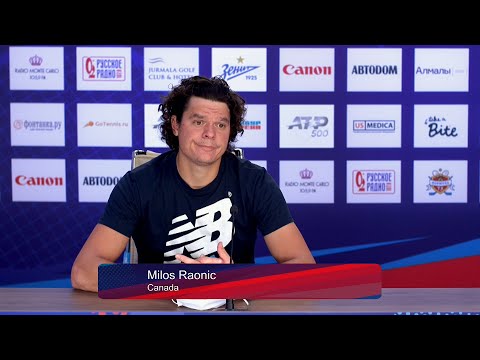