MILOS RAONIC: “THE MATCH AGAINST BUBLIK WILL BE A TOUGH ONE”

Could you just comment a bit on this first opening match which is obviously never easy.

– It was very difficult playing somebody who already had two matches to play this week and had more opportunity to get used to the conditions here and also somebody that I thought was playing pretty aggressive and free. For me it was important that I saved those 5 set-points. I came with the right approach and I was able to get better as the match went on.

– The question is: you had a good beginning after the restart and good results but then you had some problems on the clay in Rome and after you pulled out from Roland Garros. How do you feel right now?

– I feel good. I wasn’t physically too compromised. It was more scheduling decision. I haven’t  played on clay the last few years and I felt two weeks on clay to prepare to play 3 or 5 sets was not the smartest choice for my body.

– What do you think of this new sort of spontaneous rescheduled ATP calendar when people have to flight from one country to another, to switch from clay to hard? Do you think they could have done it somehow differently?

– At the end of the day I think for us players to have possibility to play is the most important thing. Tennis is always going to be one of the most difficult sport to organize in this pandemic because there are so many  players of different nationalities and coming from many different locations. So I think that’s been very positive. I just don’t see this being a way of life that’s going to change anytime soon. I know that everybody thinks it’s going to be until the end of this year but I think it is going to be much longer and it’s going to be a new norm that we have to get used to.

-You are to play against Alexander Bublik in the next round. You are going to play in front of his home-crowd. How do you prepare for this match?

– I really have to focus a lot on myself. He has the ability to do a lot of things and to make you feel silly at times with the way he can take the rhythm away from the match. So for me the most important thing is going to be making sure I do my own things well and with that I can always keep pressure on him and try to make him adjust to me more than me to him.

-Typically players would complain of the lack of free time, because of practice and matches. But thanks to the pandemic people got more free time and would engage in different types of new activities like education, training and so on. What kind of new activities have you done while taking advantage of this pause?

– It was nice to be with selected group of people around me for a longer period of time that I don’t necessarily get to spend time with. As I have been struggled with injuries, it was nice for me to have a freedom of training the right way without stress of rushing to get ready for the events. So I think both things are positive. I took up little things: I was reading a bit more, a little bit of cooking and all kind of things, but I don’t know if I’m improved enough to say that I can cook a meal for anybody else then myself.

– Alexander Bublik has been here at the press-conference earlier today and he said that he spent the best five months of his lifetime thanks to this pandemic. He said that he was just eating and sleeping. What about you, how did you take this alienation from the tennis as a human-being in a positive or a negative way?

– Depending on the way you look at it. Was it good for my tennis? Yes! I could train and the training gave me a structure and also peace of mind. Was it good for some social things? No. I haven’t really seen my family this year, I haven’t seen my parents. I believe I’ve seen them one or two nights for this year and my family is really important to me.  There are some positives and some negatives, but I just try to take it as it comes and try to make the most of each opportunity.

– Could you, please, compare your memories from 2015 of this tournament and now, five years on?

– I’ve only played one match here this year. Tennis-wise I’m very happy to be here and I’m very happy that there is a tournament going on, a higher level tournament – ATP 500 even to compete in. I think also it’s a little bit tragic, because for me St. Petersburg is one of the most beautiful cities in Europe and you can’t really see it. We are isolated in the hotel room. There are a lot of things when I decided to come to St. Petersburg that I was really looking forward to seeing to spending time outside of tennis. My walls in the hotel room are not changing enough each day to be exciting. 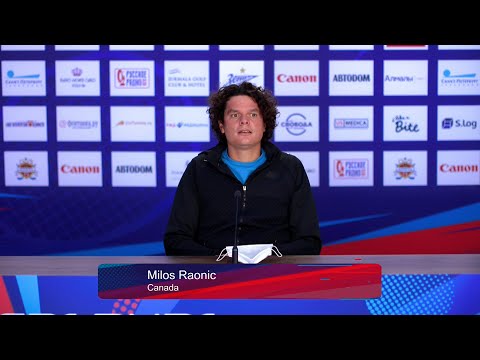