Mikhail Kukushkin: «I am very motivated to play well at St. Petersburg Open!»

16.09.2019, 21:51 #Interview #News #massmedia #Tournament
— Mikhail, you faced a young opponent, many people say Jannik Sinner is from the Next Gen and pin hopes on him. How could you evaluate your game today and his tennis in today’s match?
— Yeah, it wasn’t an easy match for R1.  On the one hand he is young; he is just 18, and inexperienced. Nevertheless, he had nothing to lose. All the experts said he has a great future. I understood the match would be tough and he played some of the rallies and shots on the highest level. But I realized pretty well that I had an edge thanks to my experience and there would be some moments were I have to use it. In the first set I used to save lots of break-points and he made a stupid error on his serve on the break-point in the first set. My experience helped me to win in such moments. In the second set I had to play better but lost two service games, so it wasn’t my best tennis.  There again I am happy I win in straight sets winning the tie-break.  I was playing consistently on key points and when the score was 40:40.  He combined crazy shots right down the lines from his forehand and backhand, he served well, but at the same time I understood he won’t play all the points at such a level.  That is why I tried to play solidly in the tie-break. I could say I tried to beat my opponent with a solid game.
— You are the champion of St. Petersburg Open 2010, you clinched the title here practically 10 years ago … What are your memories from that tournament and with what feeling do you usually come here, the organizers have changed from those times, so maybe you even conceive it as a new tournament?
— I could say that it is an absolutely different tournament: the organizers, the stadium and atmosphere are totally different. The atmosphere is fabulous! All the tennis players both Russians and foreigners like St. Petersburg Open and come here with great pleasure. This tournament is one of the best on the Tour. And, of course, I come here too. I never play the parallel tournament and chose St. Petersburg. I have some special feelings connected with the tournament: on the one hand, so much time passed since that victory and lots of things have been changed, and maybe the emotions are not as strong already but still I remember the only ATP trophy I won here and always come back to that moment in my memories.  Hope this victory won’t be the only win in my career.
— How can you evaluate the shape you are in right now? What goals did you set for the tournament?
— I am in a good shape. I had some good performance this summer, though last time I am not really consistent in my results due to some injuries and somewhere I couldn’t show my game. Nevertheless I had a couple of good wins. I took a 2-week long break after the US Open and now it is my first indoor tournament. I like this part of the season and always show my best results at indoor tournaments, that is why I am very motivated! I strive to win every match I play. I am in a good mood though I understand there are lots of strong players and it will tough to compete here, and I am not looking too far ahead.
— What do you think about your potential opponents in the next round?
— St. Petersburg Open has a strong lineup. It will be tough anyway.  Damir [Dzhumhur] is the former champion here; [Janko] Tipsarevic is playing well, too. Everyone can win the tournament.
Players 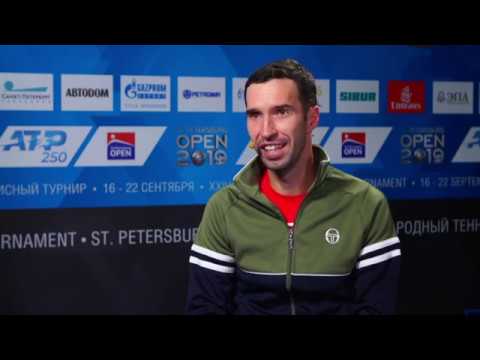 Mikhail Kukushkin ATP ST.PETERSBURG OPEN 2019
18.09.2019, 23:48 #SpbOpen2019#Interview#MikhailKukushkin#tournament
More news
«СТАНДАРТУ КАТЕГОРИИ “500” НАШ ТУРНИР СООТВЕТСТВУЕТ УЖЕ ДАВНО”
‘FOR THE FIRST TIME ST. PETERSBURG OPEN WILL BE HELD IN RUSSIA AS AN ATP 500 EVENT. THIS WILL BE THE MOST SPECTACULAR AND PRESTIGIOUS TOURNAMENT IN OUR HISTORY,’ ALEXANDER MEDVEDEV
VLADIMIR KAMELZON TALKED ABOUT KEEPING SANITY AS A VERY ACTIVE PERSON DURING SELF-ISOLATION
ДУШЕВНЫЙ РАЗГОВОР C МАРАТОМ САФИНЫМ
Borna Coric: “Medvedev Found The Right Key To My Game”
Share with friends!