DANIIL MEDVEDEV: «I JUST NEED TO IMPROVE, THAT’S THE ONLY THING LEFT FOR ME TO DO”

— It felt like on key points your service didn’t work well, as well as in the third set, did it?

— I wouldn’t say it’s all about the serve but rather about my nerves. Why? I don’t know. Usually I am playing well and consistently on key points or at least not worse than in any other points of the match.  In this particular match I played well but on the deciding points my hands were shaking in the figurative sense. And the service didn’t help in these moments, hence my loss.

— Did Reilly Opelka surprise you today with his drop shots?

— No, I knew he can play them. It is clear it is tough for him to move along the baseline and it is okay as he is a big guy. I was rather surprised by his volleys especially on the set point, he pulled off an incredible volley. I can’t understand how he did it.  Speaking about drop shots it was clear as I was far from the baseline as I was preparing for a powerful stroke but then played a good drop shot.

— Do you mean the sliced volley drop shot in the second set?

— Definitely. On set point, it was crazy.

— What plans do you have for the rest of the season? What should happen to you so you can tell yourself: “Yeah, this season wasn’t that bad”?

— My plans are to play in Wien, Paris and London. In principle, everything is simple if nothing is canceled. I think most of the players have such a plan. All in all, the season wasn’t bad at all. Sure, when you lose in R2 especially at your home tournament you’d like to say:  «That is it, the season is horrible», but I was in semis at US Open and I played well in the АТР Сup at the beginning of the season. Ups and downs are natural.  I wish I could finish the season well and win as many matches as possible. If I manage to do it, the season will be good for me.

— Looking back on last year, you went to London for the ATP Final Tournament exhausted because you won the title here. Would you consider the early loss in St. Petersburg has a silver lining? Maybe this time you will have more energy left for the ATP Finals?

— Let’s hope it’s all for the best, because we can’t predict what’s going to happen in these conditions. Maybe this will help me in London, then looking back to this loss I can say: “Okay, at least I have energy left for the ATP Finals.”

— Back to today’s match, you are known for studying your opponent well before the match. Is this at all possible with such opponent as Reilly Opelka, or is everything about the serve?

— For sure, everything is decided by serve and return especially in key moments, for example, at break points. I had even more break points than I could have with such an opponent, but I didn’t convert them. And on the contrary you shouldn’t allow your opponent to converts break points on your serve or you should save these break points with a good serve.

— It seemed like in St. Petersburg there were spectators who rooted against you – today they shouted “Let’s go, Reilly, let’s go”, and in the match against Gasquet they were cheering: “Allez, Richard”. Did it annoy you?

— No, it didn’t annoy me. It’s rather weird, and I’m curious why this happens … I understand that there could be different reasons behind it, maybe someone doesn’t like Russian players, or maybe they really like the way Opelka plays. Or maybe they are just my personal haters, but we will never find out. And if we could find out the reason, then we could discuss, understand, laugh at it or, on the contrary, get upset about it. But since we don’t know the reason, there is no point in getting annoyed about it and be even bothered.

— Reilly said that he is a huge fan of your game. For many tennis players, you are an elite player and that’s extra motivation for them on the court. They are studying your game and trying to find out your weak spots. What do you think about it?

— In tennis, playing a match is everything. Even if we take Roger Federer, Novak Djokovic and Rafael Nadal … Everyone is trying to tune in to their game, too, they want to find the right tactics against those players. But these guys have 57 Grand Slams titles in total for the three of them. Anyway, if I want to keep my level of the game and stay at the top in the rankings, then I have to deal with this, play better than my opponents and win matches.

— Reilly has recalled today the ITF match you played against each other in Washington DC. Do you remember this match?

— The match we played in juniors? Yes, right, I recall that match. I don’t remember the score, but I remember that he won the first set in a tie-break, I remember that he was already tall back then, but perhaps his serve wasn’t as good as now. In the second and third sets he got very tired, so I managed to beat him.

— It’s been a year since you won at St. Petersburg Open title, how much have you changed as a player and as a person?

—  I don’t think that I have changed a lot as a player. It’s difficult to change when you are a professional athlete already. You can only add something or improve elements that you already have. This is what we all try to do so as a player I don’t change as much as a person. I think that I change quite a lot as a person every year but I cannot name specific things.

— Players with a serve like yours usually play more aggressively while you are a defensive player. Tell us, please, what is the reason?

— I have already answered this question. When I just started to play in the ATP tour, three or four years ago, I played aggressively and tried to hit the ball with all my power. And I had both good results and very terrible ones. And at some point I started an experiment – I switched from attacking tennis to defensive tennis and realized that this tactic is bearing fruit. The goal of any tennis player is to win the match so I started to play defensively. Every time I play, I try to adapt and to do everything to win the match.

— This loss is a drama or just an annoying defeat for you? How long does it take to overcome the failure?

— It depends on the match. This defeat is one of the bitterest defeats that I can remember in this season. I think that everything was in my hands but I made some little errors and failed. Moreover he played well. Typically, it takes me an hour or two to recover from a loss, although it depends on defeats but no more than two days. This is an advantage of tennis: the next tournament is coming soon. I will be practicing the day after tomorrow, so there is nothing left for me to do but continue to work on and try to improve. 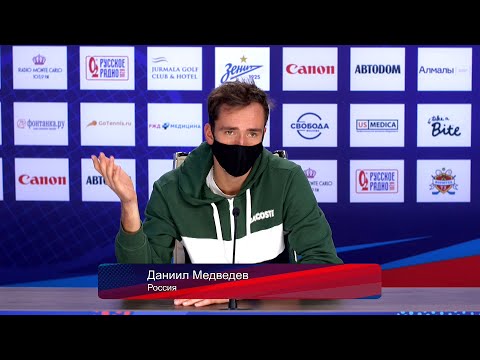