Martin Klizan: “All credits goes to Dominic. He was just the better player on the court today”

-Are you really disappointed? Are there things you could have done differently?

– Of course! It is a loss. I am not very happy. But globally it was a good week for me. It was my first tournament on a hard court after a clay court season. I stopped playing on clay court in March, so I had only three-four days to prepare before the hard court season. The end result was a final. I think it is good.

– What happened with you in terms of health? Was there any serious health issues? Maybe it was a repercussion of your fall you had in the match against Shapovalov? Will it have any influence on your future tournament games?

– I don’t want to talk about any injuries. All the credits goes to Dominic. He was just much better player on the court than me today. My performance wasn’t that good. I have a week off next week. I am going to prepare for my next tournaments. It is Tokyo, Shanghai, and then it will be Davis Cup tie. There will be my last tournaments this season.

– We know you had 6 wins in finals in a row. Did it have any pressure on you during today’s match? Maybe you felt obligated to win the seventh one?

– I finally lost because everyone was asking me how I do those famous comebacks and never lose in finals. Now I lost, and nobody can ask again me those same questions anymore.

– You beat quite strong players this week -Wawrinka, Shapovalov, Fognini in a row. You already said that you played better than that year when you won a title. Do you still think so? Do you look with optimism into your future?

– Yes, as I said, it was a very good week for me. I really want to come back here next year, because it is great here. It is one of the best tournaments in the world, in this year. I just felt very comfortable. It was just an amazing run. I beat some really good players. I am just happy with my performance. I can’t be happy with my today’s performance, because I lost. But in global terms it was a great week for me. 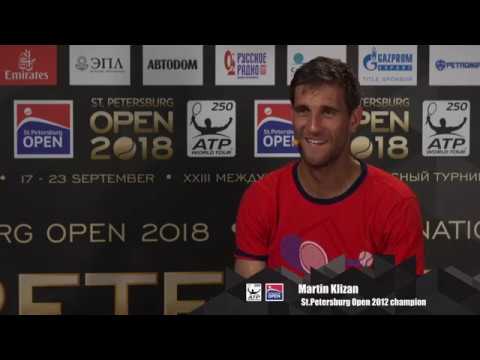 Martin Klizan ST.PETERSBURG OPEN 2018
29.08.2018, 04:05 #SpbOpen2018#Interview
More news
SHOTA MIRILASHVILI, CEO WATERGEN RUSSIA: «The exquisite elegance of tennis is associated in full harmony with our company!»
BOTIC VAN DE ZANDSCHULP: «I HOPE RUBLEV WILL REMEMBER ME NOW»
MARIN CILIC: «I STILL HAVE THE ENERGY FOR THE SEMIFINALS»
ANDREY RUBLEV: «BOTIC PLAYED A GREAT MATCH AND WAS AT HIS BEST WHEREAS I JUST PLAYED AS USUAL AND IT WASN’T ENOUGH TO WIN»
JAN-LENNARD STRUFF: “I’D LIKE TO FLY OR TO MOVE THROUGH SPACE ON FLICK”
Share with friends!