The Briton Jamie Murray, former world №1 in doubles, and the Brazilian Bruno Soares, former world №2 in doubles, participated in a Tennis Talk meeting held on October 28 in the spectators’ area of ​​SIBUR ARENA stadium. The host of the event Alexander Sobkin congratulated on their win and invited the players to share their impressions from St. Petersburg, their favorite places and sights. Both of them are absolutely in awe with the city, the museums and the architecture, they are very pleased with the tournament and its organization and hope to come here again in the summer when the weather will be more welcoming. When talking about Russia the host asked a follow-up question about the words in the Russian language that the tennis players managed to learn. While Bruno mentioned something typical like spasibo («thank you») and davay («come on»), Jamie unexpectedly came up with the word morkov («carrot») which he learned yesterday in the restaurant. The next question was about music; the players were asked to share 3 top-songs from their playlists. Bruno happens to prefer relaxing music, like Coastline by Australian indie-band Hollow Coves, a trusted hit by Fleetwood Mac – Dreams, and Ordinary people – a very famous song by John Legend. Jamie is more into rock, particularly the British band Oasis, he mentioned their absolute hit Wonderwall and the song Don’t look back in anger, he also shared a new name with the Russian audience – a Scottish singer who is very popular in his homeland Lewis Capaldi and his song Someone you loved. The dive into European culture continued with questions about Halloween which will be celebrated soon. Both Bruno and Jamie remembered that in their childhood it was not so popular but nowadays their kids enjoy dressing up for school and trick-or-treating. Both players would love to play in costumes and even promised us that if they reach the finals at least one of them will be dressed up as Batman.

The interactive part of the Tennis Talk included two quests – the players had to guess what happened on the days and years of their birth in the world and figure out which one of their peers was hidden under a smile on the photos. The first quest was not an easy one for the pair because while Jamie guessed almost everything, Bruno was struggling with questions related to football and cinema. The second quest was a much more definite success, though the tennis players were no match for young fans who were present in the Tennis Talk zone and were actively shouting the right answers. The meeting concluded with Alexander Sobkin wishing to the players good luck and moving further up the draw. 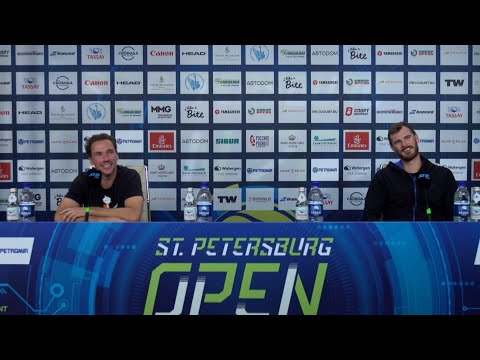