MARIN CILIC: «I JUST KEPT PLAYING AND THE CHANCE PRESENTED ITSELF»

In today’s match you were down 1/4, Karen was probably playing very good tennis, not the best of his career, but very good tennis. And you were kind of down. Where did you find your source of inspiration? Maybe the dancing girls inspired you during the changeover?

No it wasn’t the dancing girls (laughter). I was also 15:30 down on my serve at 4/1 down. I just stayed focused and continued to play my own game and continued with a good level. I thought: “If Karen plays great next two games – ok, well done, great match”. But I kept hanging in there, which was amazing. I was feeling that I might get a chance. It’s definitely not easy to turn the tide of the match after 2 hours or even 2 h 15 mins that we already played. I got the chance and I took it and played really good. I have to say that I absolutely earned it. In the end that was the difference in making one or two balls at those critical points. It could have been him, who could win the match and I wouldn’t be surprised. It was a very close match.

How did you find your range at your serve at 15:30? It looks like your serve was kind of shaky at this moment?

I actually found good rhythm in those few points, at first I lost a few points, but I think I hit an ace after that. Then a few good serves, 4/2 and the pressure transferred back to Karen, but I have to say looking at the match as a whole, the level was great. Both sides. In the first set we were playing amazing tennis. Karen plays 3 amazing points and, then ok, makes 2 double faults to lose the first set, these things can happen sometimes. But overall it was a great set, he didn’t play anything bad up to that point and in the second set it was again good tennis. One break for him, I came back, he played an amazing tie-break. The level was very high even if I would lose today, I would be disappointed, sure, but still I would know that I played a great match.

As far as we know one of your coaches is Vedran Martić and he was also the coach of Karen Khachanov a few years ago. Did you speak with him, did he help you today?

Unfortunately I stopped working with Vedran a month and a half ago, so we didn’t speak about the match and I just spoke with my coach Vilim Visak over here but I know that they worked together. It was a great combination, the two of them. I respect Karen so much, he is a great guy and we often practiced together. Today I won but, as I mentioned, the match was very high quality.

You became a father in September for the second time, so the question is about kids: how is the older one taking the younger one? And maybe the older one has already developed any interests in sports – maybe even in tennis?

Thank you for bringing this up. My older son Baldo when his brother Vito came back home from the hospital for the first time was just kissing him and we brought presents to Baldo saying that they are from Vito so they already get into a relationship with each other quite good. But he loves him as it is, he is always adoring him and wants to hold him. Baldo loves tennis when he was with me in Stuttgart for the tournament over there we had a big players’ lounge with table tennis, basketball, football, fitness balls and he was so much in awe fascinated with the balls. When we got home he played everything with the ball, football or tennis and so he loves hitting balls and balloons. And he has good coordination. 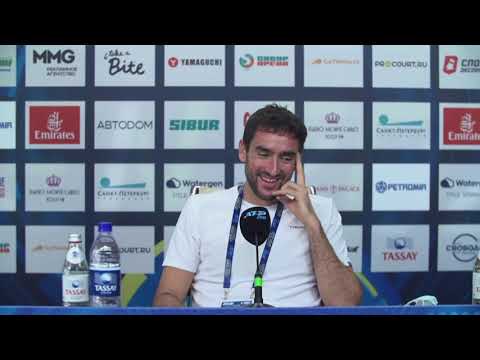 Press conference with Marin Cilic, St. Petersburg Open 2021
28.10.2021, 20:48 #spbopen2021
More news
SHOTA MIRILASHVILI, CEO WATERGEN RUSSIA: «The exquisite elegance of tennis is associated in full harmony with our company!»
BOTIC VAN DE ZANDSCHULP: «I HOPE RUBLEV WILL REMEMBER ME NOW»
MARIN CILIC: «I STILL HAVE THE ENERGY FOR THE SEMIFINALS»
ANDREY RUBLEV: «BOTIC PLAYED A GREAT MATCH AND WAS AT HIS BEST WHEREAS I JUST PLAYED AS USUAL AND IT WASN’T ENOUGH TO WIN»
JAN-LENNARD STRUFF: “I’D LIKE TO FLY OR TO MOVE THROUGH SPACE ON FLICK”
Share with friends!