MARIN CILIC: «I STILL HAVE THE ENERGY FOR THE SEMIFINALS»

You said that it was a completely different match from yesterday. Can you elaborate on what the difference is, because it was also a three-setter?

The difference was in the opponent. Yesterday Karen was hitting big, serving big, hitting backhand and forehand aggressively. He played a great match yesterday in that sense. It was very intensive also mentally for me coming back from 4-1. And Roberto gets so many balls back and he is very solid, so you have to fight for every point with him, he will not give you many unforced errors. The intensity today was different, too. I was feeling good, but missing some balls here and there, struggling with my rhythm.

Now you have made it to the semifinal, but you have just played very close three-setters in a row. Do you have enough stamina left?

Yes, I think I do. I will admit that I am a little bit tired because in these two weeks I have played 8 matches back to back, but this is normal. I would need to get my energy back by resting tonight, but overall on the court I am moving well and I will definitely be close to a 100 percent tomorrow.

Have you completely adapted to the new court which you said is a bit quicker? And does it suit your game better than on the first day?

Yes, I have adapted to the court and I am hitting the ball really clean, everything is good. I have lost a little bit of rhythm on my serve, but that is nothing big, I think. I guess, tomorrow is going to be really good tennis again.

You said earlier that this match has been mentally tough. How are you coping with those mental moments?

Different things for different occasions. Sometimes I am breathing and trying to lower my pulse. Today it was more of a calm match in that sense and I needed positivity and energy. It is good that my fans were here to support me, they really helped.

What about Croatian fans? After yesterday’s match there was a lot of positive feedback in Croatian media, so do you feel the support of your homeland?

I do, absolutely. The thing is that I hit huge success and I have a big fan base in Croatia, but the last few months were tough for them and for me. Now all of them want to see me playing good tennis, which I am now. And that also gives me a sign that I am moving in the right way.

Are you active on social media? Because some players see it more as an obligation.

I am active, I feel I could do more, but sometimes I just forget about it. I am not the kind of guy who will be spending hours on social media, but I like it as a way of communication. It is a great way to be closer to the people that really like you and follow you.

What about your upcoming match and your opponent?

I was just watching the match right now between Andrey Rublev and Botic van de Zandschulp, it is a good match. Botic is new guy on the tour, he came off qualifications at the US Open, there he lost to Daniil Medvedev and it was a very tough match. He is a big guy, serving well, moving well, playing good tennis. He is a great player now and is only going to become better. And I don’t have nothing new to say about Andrey as I know him already. So we will see in the semifinals, I will have to show my best game.

There is a jazz band playing during changeovers, have you noticed it? And what music do you associate tennis with?

I noticed of course, it is good music. I really like it, it is very rare that we see a live band playing during the match, so it’s amazing for the atmosphere. Hopefully tomorrow there will be even more fans to enjoy. And for me any music that has good energy is great for tennis. 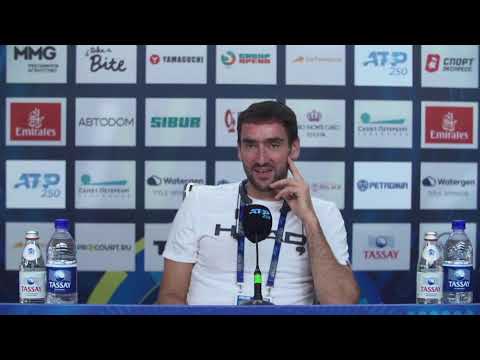 Press-conference with Marin Cilic, St. Petersburg Open 2021
29.10.2021, 21:00 #spbopen2021
More news
SHOTA MIRILASHVILI, CEO WATERGEN RUSSIA: «The exquisite elegance of tennis is associated in full harmony with our company!»
BOTIC VAN DE ZANDSCHULP: «I HOPE RUBLEV WILL REMEMBER ME NOW»
MARIN CILIC: «I STILL HAVE THE ENERGY FOR THE SEMIFINALS»
ANDREY RUBLEV: «BOTIC PLAYED A GREAT MATCH AND WAS AT HIS BEST WHEREAS I JUST PLAYED AS USUAL AND IT WASN’T ENOUGH TO WIN»
JAN-LENNARD STRUFF: “I’D LIKE TO FLY OR TO MOVE THROUGH SPACE ON FLICK”
Share with friends!