CAMERON NORRIE: “EVERYTHING IS GOING MY WAY THIS WEEK”

– Could you elaborate a little bit on what you said on the court about your  impressions?

– First of all, it’s great being here in Russia, St. Petersburg looks like a beautiful city. I’m really happy to get through, it was a tough match, but I think the conditions here suit me – the court is quite slow, the balls are slow as well, and I had some time to prepare my swing. Obviously, I had two good wins here against Fritz and Kecmanovic, it means a lot. I was struggling a little bit on clay, so it’s good to come through those and good to be back on a hard court. I’m really enjoying it here: the hotel is great and everything, so I’m happy to be here.

– You had been playing in college tennis for many years and you turned pro only in 2017. So in hindsight, do you think it was the right decision to combine the education and tennis training or maybe on a second thought you would had taken another decision and would have preferred to become a pro earlier?

– Good question. No, I think for me it was a great decision to go to a college in the United States. I don’t think I was mature enough at around 18 y.o. to turn pro then. It’s tough out there: straight to the futures, it would take a lot of loses, a lot of scaring. For me it was great to go to Texas and to the TCU, you have got 3-4 years and you have your coach and your fitness trainings, everything is organized for you, and you are getting education at the same time and you are not spending any money. It’s a wonderful system, you can just really enjoy your tennis, you have a good balance in life, live a kind of normal life first and then you are on the tour after. For me it was great, I really enjoyed it and matured a lot, there was lots of work in my game and I developed physically. Once I did turn pro in 2017 I was already ranked 276, I hit the ground running, I was straight into challenges and progressed quickly from there and didn’t waste much time. Looking back, it was a great decision and I definitely recommend it for any up and coming Russian players or any juniors coming up and especially with education you can always fall back on if you are not successful in tennis.

– What kind of diploma you got? What are you specialized in?

– I was doing economics to start and then I changed to sociology.

– You are working now with the Facundo Lugones. How is it going between the two of you? How does it feel to be cooperating with your personal coach after you finished the college system?

– I actually went to college with him; I played on the same team with him. Definitely our relationship has changed and has become more professional. I think it’s great for me to have a very relaxed coach that I’m get on well with and I’m spending almost the whole year with him, because I’m travelling to many tournaments with him. It’s been good to find someone that I get on well with and who is very professional, very knowledgeable and passionate about the game of tennis. Especially nowadays I don’t want to travel too much with families, but it’s been good having him. He is very committed, so it’s been perfect and he is there with me week and week out. I give a lot of credit to him, he is a great coach and a great guy off the court, so I’m lucky.

– I read in the statistics that in your match against Schwartzman at the US Open, there were 58 break-points for both of you and you also saved two matchpoints. You held 4 match points today and you obviously were up in the second set, then something happened. Does it mean that sometimes you have difficulties closing out a  match or it’s just today?

– Not really. Today he played a little bit more aggressivele and it’s not like I had an obvious chance when I was serving, I missed an easy ball. He came out good in the second set, especially at 6/5 I missed a couple balls and then he played a really good tie-break and a little bit more aggressive than me. In the third set it was pretty tentative stuff, force and back, I had couple of matchpoints and he had a couple of winners, so all credit to the guy. I was still a break up, even if he held that game, I was still going to serve, so I was in favor to win it. It’s never easy and I think I doubt with the big moments in the match today and that’s why I came through and played a very clean third set.

– Potentially you might face Andrey Rublev, though he hasn’t won yet. What can you say about him specifically and may be about the other two Russian players (Khachanov and Medvedev)?

– It will be great to play Rublev. He is doing so well this year. He is always confident and I am happy for him. He definitely improved a lot. It is going to be difficult but I just will go there playing like I have nothing to lose. I will keep doing what I am doing. It’s really good that you have these three guys. Rublev, Khachanov and Medvedev doing extremely well and I think it’s good for Russian tennis. Hopefully that influence the younger generation to come to tennis. They all are very talented guys. I think that they are maximizing the potential, so all credit to them.

– The final question is going to be the linguistic one. It’s written that you are representing Great Britain but you do not speak quite like Margaret Thatcher.

– I grew up in New Zealand and when I moved to London when I was 17 so I have not a typical posh British accent. I think a little bit of kiwi and British mix. I am pretty disciplined, so no American accent. 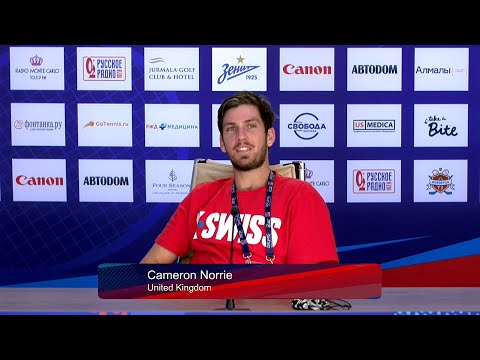