KAREN KHACHANOV: “MY SON SOMEHOW MANAGED TO HIT THE BALL WITH MY RACKET”

Karen, you and Andrey Rublev have dropped only two games to your opponents [the Russians Tiurnev and Golubev] in the opening doubles match. Do you like to have such easy starts at tournaments to get used to all the conditions and to get a feel for the tournament’s rhythm?

I just arrived yesterday and I had a practice in the evening. And today I was playing that doubles match. Thanks to such type of matches you get to a feel for the difference between the practice and center courts. In general when you come right after the previous tournament you need some time to adapt.  Now I came after the Moscow tournament where I was in the quarterfinals, went rather far in the draw. There was little time for rest. And tomorrow I am playing my singles match. So, yeah, it is like a good practice for me.

Andrey Rublev said that the courts in Moscow and St. Petersburg felt differently.  Here the court is not really fast too but comparing to the Moscow it is different. Can you comment on that?

It is felt differently on every tournament. Balls are different. And the court is different, too, though the surface seems the same but when you start playing, it differs. And also, the arenas are different. Conditions are different that is why I think that several days to practice and adapt are very important before the start.

In Moscow you said you need to stay there longer to get a French visa. Did you manage to get it and will you go to the Paris Masters?

Not yet. On Monday morning I likely applied for visa and it wasn’t easy because of the lockdown. Now I am waiting for the result.

What mood will you come to Paris in? You clinched your first big victory there beating Novak Djokovic in the finals?

Now I am thinking on the tournament here, in St. Petersburg.

The French Adrian Mannarino is your R1 opponent, you played him in the Moscow final three years ago. What do you think of the upcoming match?

He is not an easy opponent, last week he beat Andrey [Rublev]. It means he is in a good shape. I actually watched him play in Moscow. He reached the quarterfinals there. I will compose myself before the match. Tomorrow will be a new day; a new match and it will be the first one for both of us at the tournament. I will fight. It won’t be easy but I hope everything will work for me.

Welcome to St. Petersburg. Who came to support you here from your family and relatives?

Thanks, I like St. Petersburg, I have good memories from here. I like this tournament; the organization is on the top level and I enjoy playing here. I came with my wife and son, my coaches, tomorrow my sister will come. Due to the pandemic restrictions, I couldn’t take more people with me. Though maybe if I stay longer throughout the week, someone else will come to support me.

You have a little son, David. It’s clear that it is difficult to watch him grow when you are travelling a lot.  Do you have a family chat or something to follow all his new steps?

We call each other every day when they are not with me, so I watch him grow on videos. We are trying to travel together to tournaments. Though due to different restrictions and a busy schedule it is not always easy. Last year during the lockdown I spent 5 months with my family when there were no any tournaments.

Do you notice any interests formed?

It is early to say; he is only two though he looks like he is four or five-year old. He is very active and he has lots of energy. Of course, if he pays interest to tennis, I will help him with developing in this direction. Now he somehow managed to hit a ball couple of times with my racket.

On Instagram there are series of pictures from significant city sights from the places where you’ve been to tournaments. Is it some kind of tradition for you?

No, there is no such a plan and never was. There are few lifestyle pictures. When there is time to walk around and you just want to take a picture in a beautiful place, I do. In Moscow we took a picture near St. Basil’s Cathedral the next day after the tournament, I wanted to show Moscow to my coaches. We went to the Sunday branch at Dr. Zhivago restaurant that is right opposite the Red Square, and we decided to walk there and to take a picture.

They haven’t seen much, Moscow is a beautiful city, at least something they saw. My physio is running, so he saw even more as he did runs in Moscow.  And they are delighted with St. Petersburg especially from the night St. Petersburg. They like Russia, that is why they come here.

Russia’s Davis Cup lineup was revealed, and there are more people on the team now. Two years ago, you played with Andrey Rublev in Madrid all the matches though Evgeny Donskoy was also on the team.  Now six people are going: you, Evgeny Donskoy, Daniil Medvedev, Aslan Karatsev, Andrey Rublev and Roman Safiullin – he is also going with you so that you could vary hitting partners. What can you say about it?

This lineup is the strongest one. Two years passed since 2019, last year the tournament was canceled unfortunately. In 2019 we were playing without Danya, he couldn’t make it to Madrid. And this year we are preparing from the very start of the season together with Daniil and Aslan, too.  We have been always dreaming of winning the Davis Cup in such a team. We were working on it and now we have a huge desire to do it. It has always been our priority, though it is at the end of the season. I think everyone is ready. The main thing is to make sure everyone has no any injuries, so we can come there in our strongest lineup, with the team we’d like to. 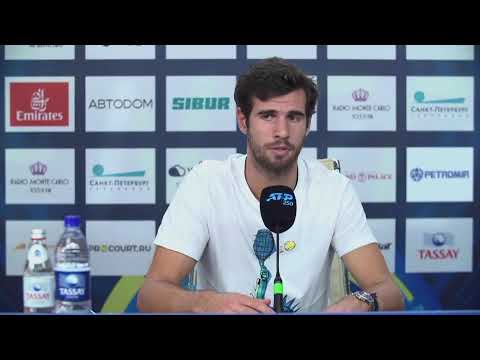 Karen Khachanov Press-conference St. Petersburg Open 2021
26.10.2021, 21:26 #spbopen2021
More news
SHOTA MIRILASHVILI, CEO WATERGEN RUSSIA: «The exquisite elegance of tennis is associated in full harmony with our company!»
BOTIC VAN DE ZANDSCHULP: «I HOPE RUBLEV WILL REMEMBER ME NOW»
MARIN CILIC: «I STILL HAVE THE ENERGY FOR THE SEMIFINALS»
ANDREY RUBLEV: «BOTIC PLAYED A GREAT MATCH AND WAS AT HIS BEST WHEREAS I JUST PLAYED AS USUAL AND IT WASN’T ENOUGH TO WIN»
JAN-LENNARD STRUFF: “I’D LIKE TO FLY OR TO MOVE THROUGH SPACE ON FLICK”
Share with friends!