KAREN KHACHANOV: «I’M GLAD I AM IN THE QUARTEFINALS OF ST. PETERSBURG OPEN THIS YEAR»

– Karen, your opponent either was serving well or was playing well from the baseline and was returning well, too. The only chance was to take the set into the tie-break and actually you did it. But the tie break started with a lucky net cord for Raonic. Did it take you off balance?

– You are absolutely right, if there is a chance to take it into the tie-breaker or to make break – you just try to do it. But if there is not, you are just trying to hold your serve.  He was playing consistently throughout the whole match today. It is clear I could do better in the first set but I gave away two breaks. Though it all depends on how you look at this match, he didn’t give me rhythm and he was playing actively and aggressively from the very beginning. And it put extra pressure on me. And you begin to get nervous and think: “Should I play more actively to play whack shots or to drag him into long rallies?”. And in the second set I started to won games on my service and to come in court and I made it to the tie break. To be honest when he is playing like this it is difficult to do anything.  I was fighting till the end as the wish to win in front of the home crowd was huge. But it didn’t happen, and I should give him credit for it.

– If there were less nerves maybe you could have won today, couldn’t you?

– I can’t say I was more nervous than usual. When you step on court you want to start as well as possible. In today’s match I didn’t start well and he was playing very well from the very beginning. And you feel this type of pressure you more and more throughout the match, especially against such a player as Milos who has a powerful serve, so if you get broken once, it is difficult to come back and if he breaks you twice – that’s getting even more difficult. Then you are starting to get nervous even more and you tighten up as you don’t know what to do to play narrow the gap. The second set was very close so I did everything right but he fired 3 aces in the tie-break and the match was over.

– Raonic is rather tall and it is difficult for him to play low balls. Why weren’t you playing more slices?

– It is impossible to win the match with slices only. Sometimes you can play slices and mix it up with other strokes but in that case my goal was to seize any little chance to start my attack and to play aggressively and to make him move on the court. Sometimes it didn’t work today because he was returning well, aggressively and risky. On his serve he would win at least two points, so it was like a lottery. Plus, there is an extra pressure on a player who is serving against him as he makes you keep concentration in any rally and to play flawlessly every ball while he could afford to take risks

– What positive moments could you take from playing at St. Petersburg Open 2020? This tournament wasn’t always good for you but this year you played two good matches here.

– It is clear you always want more. At every tournament you want to go as far as possible and win. I can have this tournament to my credit as I didn’t manage to win the R1 matches in St. Petersburg before.  I’m glad I managed to reach the quarterfinals at an ATP500 event. So, I will continue to work, I will go to other tournaments and we’ll see how it goes by the end of the season. 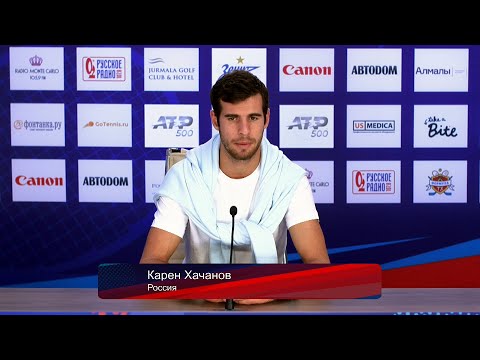