KAREN KHACHANOV: «I DID NOT EXPECT THE MATCH TO BE THAT TOUGH»

– Karen, today you played very emotionally and encouraged yourself by pronouncing phrases in Spanish. Tell us, please. do you use terms in Spanish often in your speech?

– No, not really often. My second coach is a Spaniard and he is now here with me in St. Petersburg. I probably did that for him to understand me. Moreover, we play in St. Petersburg, so don’t want to swear in our native language. But it was not a curse, I just told myself that I need to play earlier and hit the ball higher.

– Do you think that Aslan played better at the beginning of the match or you just had nervousness or some other problems?

– There is always a little nervousness at the beginning. Of course it is a controlled nervousness but still. I expected a tough match because I knew he had nothing to lose, he was playing against a higher ranked player. I heard Aslan’s press-conference and he said that this fact motivates and encourages him, so I was expecting a tough match, but did not expect it would be that tough. At the beginning of the match, all his balls hit the court, all credit to him. He did his job and did it well, so at the beginning it was difficult for me.

– Was it a surprise for you that Daniil Medvedev lost in the match for a spot in the quarterfinals?

– I was warming up before my match and watched the match between Daniil and Reilly Opelka. I thought that Daniil will outplay him in the end of the day but Reilly is a very tough opponent who can score a crazy point with his powerful serve. I have not seen the end of the third set, but such matches do happen. As for me, tomorrow I will most likely have a very inconvenient opponent – Milos Raonic. He is even more dangerous than Opelka from the baseline.

– Karen, were there were as many spectators at your matches after the restart of the season as there were today? 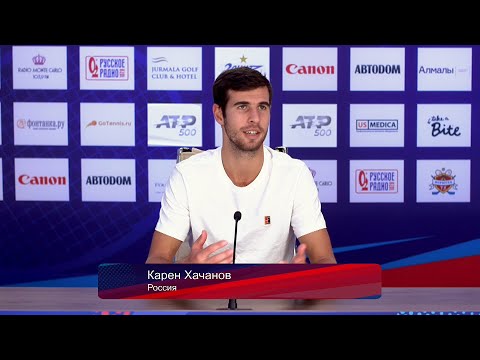