KAREN KHACHANOV: «MY GOAL IS TO STAY IN THE DRAW AS LONG AS POSSIBLE»

– Karen, it was your son’s David birthday recently, he just turned one year old. Please, tell us how you celebrated this event?

– Unfortunately, I did not celebrate his birthday with him and Veronica. I was in Rome on that day. The plan is to celebrate one year and one month with family and friends when I am in Moscow. I hope it will come true. I haven’t prepared his birthday gift yet. It’s on the way. David is a very active kid. He loves to communicate with other children, loves to walk. The main thing I am concerned about is that he grows up healthy.

– Does he take a racket?

– Yes, he is actively throwing my rackets. It looks like he’s left-handed.

– In what mood did you come to St. Petersburg? What are your goals for the tournament?

– I arrived in St. Petersburg in a great mood! St. Petersburg Open is one of my favorite tournaments. I think, it is one of the best tournaments on the tour in terms of organization. It is a great pleasure to play in Russia. Every year I come here with a fighting spirit. My goal is to stay in the draw as long as possible. I don’t want to set for myself any limits, but every match is a serious issue. I will try to go in the tournament as far as possible.

– Are you satisfied with the way the season is going for you after the break? Was it difficult to get ready forthe season considering that you spent a lot of time at home?

– It was both easy and difficult at the same time. I don’t remember any other time when it was possible to spend so much time at home with the family in Moscow. This has not happened over the past 7-8 years. There was no need to rush anywhere, either. I had time to get ready for the restart of the season. Yes, I was not with the team at that moment, but we communicated with them online, I practiced and tried to be in a good shape. As for the restart of the season, I can say that I always want more, I always want to move on, I want to win tournaments. It’s not a secret. I think that I have played consistently in many tournaments. Now I want to continue in the same way.

– During the quarantine, there were many different online activities, online interviews. Which of all of this was the most interesting? Was there anything surprising when you got back to the court? Maybe you missed something  most of all?

– Tennis players fly every week from one place to another, from tournament to tournament. And then you are sitting at home and you can’t go anywhere because of the pandemic – it can be difficult for someone. A lot of people were not very happy about it. I missed traveling, the tournaments, the adrenaline rush that you feel before going on the court, on the court and in general from the competition. But, again, I am very grateful to this time, because I managed to spend it at home. I even managed to have a rest. It was great to spend this time with my family and my son, to see how he grows up. This time might not have happened. For this I am grateful to the quarantine.

– There was that Roland Garros finals yesterday. Rafa equaled Roger’s record in terms of majors wons (20). Djokovic has 17 Grand Slam titles. Who do you think will eventually win more Grand Slam titles?

– Well, I would say Nadal. I don’t know. Djokovic is a little bit younger, many are betting on him, but I would say that Rafael Nadal will win more Grand Slam titles.

– Please tell us why you rarely go to the net? Would you like to change this component of your game?

– Yes, this is probably one of my goals in terms of improving the game. The main thing in the performance of this element is confidence. You just need to train it more, try to go to the net more often. We need to make it more “automatic”. Yes, doing it more and better is one of my goals for now and for the future.

– Now players often use game analysis, errors analysis and statistics, which are provided by special companies. Do you use these tools when preparing for your matches?

– I do not use services of this kind of companies to collect statistics and analysis of the game for me. I discuss more with the team what I will have to do in the upcoming match, what will be the approach and plan. It’s clear that you have to analyze the opponent’s play, watch the matches and use this information during the preparation. I believe in statistics, but it doesn’t always apply to all matches. In the end, you can change both the game plan and the strokes depending on your opponent. It’s good to look at it, but I haven’t been using it yet.

– What are your goals for this tournament and for the rest of the season?

– Now my goal is to stay in the draw as long as possible. In St. Petersburg, unfortunately, after my first performance when I earned the first points, I could not even go through to the next round. All the time there were some difficult matches, so now I just want to play and try to go as far as possible. As for the goals for the rest of the season, I will just keep playing. We have a few tournaments left, we need to try to play as best as we can, we’ll see how I’ll end the year, and I’ll start to train and make plans for the off-season – depending on how much time we will have, and we will make plans for the beginning of next year. It also depends on what kind of tournaments we will have – this is also still unclear.

– You have already played a very tough match against Stan at this tournament. Back then you were out of luck. How important is this part of the season on hard to you? You can’t drop out of the top 20 right now. How do you evaluate s your chances of returning to the Top 10?

– I like to play indoors, obviously. I also love clay, I love hard. In this case, there are several indoor tournaments left, so, of course, I want to play as best as I can and finish the season as high as possible in the rankings. If it turns out that I won’t be in the Top0 by the end of the year, well, let it be. Obviously, the goals are much higher. I’d love to be as high as possible in the rankings.

– You also play doubles (with Andrey Rublev) at this tournament. What are your goals for the doubles tournament? And why did you decide not to play in doubles at Roland Garros?

– We decided not to play at the Roland Garros, firstly, because there was bad weather, I didn’t want to play three sets without a decisive point, without a super tie-break, I didn’t want to spend a couple more hours there, spend my energy. I haven’t played in doubles at Grand Slams for the last 2-3 years. We decided it with my team – it didn’t seem reasonable to do. Here in doubles we (with Rublev) want to win at least one match. Because, unfortunately, this year we lost in all our doubles tournaments in the first round. 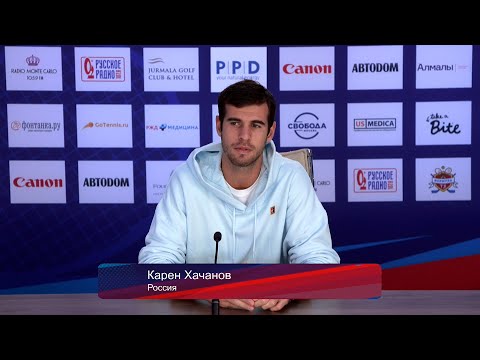