ILYA IVASHKA: «WE DISCOVERED A FORMULA THAT ALLOWS TO BALANCE TRAINING AND REST»

What do you think about today’s match with Laslo Djere? Seems like you are in a good shape, what is your take on it?

Your next opponent is not an easy one – you played with Andrey Rublev before here in St. Petersburg in 2019 and there you succumbed to him in 3 sets. What are your thoughts on the upcoming match with him?

I am glad to play him. This season Andrey showed that he is a very high level player. We are on friendly terms with him. I think that the match is going to be quite good and I will try exert myself.

During the season you were showing good results on different surfaces: in Munich you reached the semi-finals on clay, you made it to the quarterfinal in Eastbourne on grass, at Wimbledon you got to the fourth round. And let’s not forget the win in Winston-Salem on hard. So what is your favourite surface?

I think I have to say hard inside the stadium, because I grew up on that surface. When I was young we never played on clay or grass.

So you did not train on clay in Minsk?

We always skipped clay. I even had years where I didn’t have any matches on clay – you just choose tournaments played on hard only. And when I started training in Spain, I started playing on clay more and improving my game on this surface.

What do you think is the reason for the break in your career this season? We know that you suffered injuries. Maybe because of them you missed tennis and were anxious to win?

It is hard to say. Maybe it is because this season I had an opportunity to play at major tournaments all the time. You can say that almost every week I participated in a major tournament and all of them without any injuries – it also gives you a good experience to go through the qualifications and then I pulled off some good wins. Also I finished the last season pretty well by winning two Challengers – it boosted my confidence and I think psychology is important here.

Yesterday while talking to the journalists Andrey Rublev mentioned that you are in a good shape and standing lower in the rankings than you are really worth. What do you think your ranking should be now?

I think I deserve being where I am now. I don’t think that I should be ranked higher.  Of course, I wish I held a higher position but I think that my current ranking is reflecting where I am at this moment. Andrey is just being too nice to me.

Who is on your team right now?

My coach Jose Checa-Calvo, we’ve been working together for 4 years now – I have the same team. My fitness coach is also from Spain, with whom I also worked for 5 years, but now I have a different coach. But other than that there are no changes in my team. All the same people.

Talking about your results this season, did you change anything in the preparation process?

We may have discovered a formula that allows to balance training and rest. Because before that I was working a lot and didn’t have enough rest, so I got injured quite often. I would come to a tournament in pain because I didn’t have enough time to recover. But then we began to choose moments to work and moments to be laid back and maybe it helped. We started to be more thoughtful not only about training but about rest as well.

This is the year of the Olympics in Tokyo which was held in unusual conditions for the whole sports world. Share your opinion about the event on court and off court.

I loved it, this will be one of the most vibrant memories of this year. Of course, it would be better if we could support other athletes and if we could play before fans in the stands, but I still loved it. Here during tournaments, we are always on our own, but at the Olympics there is a special atmosphere.

Maybe there were some cultural differences that you were surprised by?

Unfortunately, we were unable to leave the Olympic village and courts so we didn’t see anything.

You already participated in the Kids Day here at Sibur Arena. There were a lot of unusual questions for you, do you remember any particular ones that amazed you? Do you like such unusual questions?

Yes, I enjoyed it immensely! Kids ask the best questions, they are honest and simple. They ask about things that are personally important to them. I remember one question which was whether I get worried before going out on court? Because they think that they are the only ones who worry before the game. And they have no idea how worried I might get or the other professional players because this is normal for all of us as tennis players.

Then another informal question – what do you enjoy watching and listening?

I try to read. I can’t say I enjoy reading but I try to push myself to read and distract myself from tennis that way. I love mountains, nature and if I have a chance I am trying to go for a walk. I am mostly watching documentaries and I enjoy Russian TV-shows more than foreign ones.

Can you advise us anything maybe something you are reading right now?

Now I have almost finished «The Picture of Dorian Gray”. I really enjoyed detective novels by Robert Galbraith. This is an ongoing series, but until the third book I didn’t even know that this is Joanne Rownling’s pen-name (author of Harry Potter books). The last documentary I watched was on Netflix, it is called «Game changers» and it’s about vegetarians.

Did it make you change your eating habits?

Of course, they filmed it that way which makes you stop eating meat. I tried it but quickly felt that this is very hard. When you are at home you have an opportunity to choose what you are going to eat and it is easier to see about the meat. Yet at tournaments it is very hard to focus on what you are eating. I am trying to eat healthily; I know what is good for me but I never limit myself.

And how long that experiment lasted?

A month in December while I stayed at home. But then in Australia during tournament I started eating as usual. 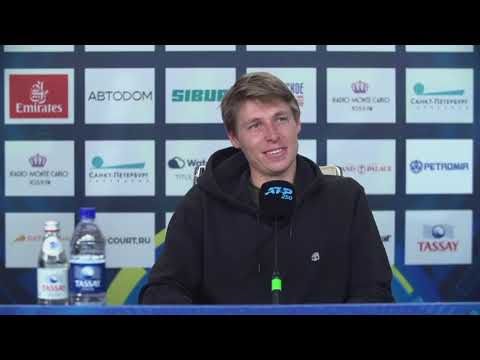 Ilya Ivashka Press-conference St. Petersburg Open 2021
26.10.2021, 16:37 #spbopen2021
More news
SHOTA MIRILASHVILI, CEO WATERGEN RUSSIA: «The exquisite elegance of tennis is associated in full harmony with our company!»
BOTIC VAN DE ZANDSCHULP: «I HOPE RUBLEV WILL REMEMBER ME NOW»
MARIN CILIC: «I STILL HAVE THE ENERGY FOR THE SEMIFINALS»
ANDREY RUBLEV: «BOTIC PLAYED A GREAT MATCH AND WAS AT HIS BEST WHEREAS I JUST PLAYED AS USUAL AND IT WASN’T ENOUGH TO WIN»
JAN-LENNARD STRUFF: “I’D LIKE TO FLY OR TO MOVE THROUGH SPACE ON FLICK”
Share with friends!