EVGENY DONSKOY: “TODAY I AM HAPPY WITH MY RETURN”

— Please, tell us about the tactics in the match against Egor Gerasimov, a player who prefers powerful tennis.

— The tactics in such matches are simple. He serves well, so you need to return as many balls as possible. By the way I am happy with my return throughout the match. I was returning really well. In general, I know that Egor plays well the soft balls, so I had to make him move a lot. We can say that running is his weak point. I tried to play something like this.

— He made three double faults in a row, if I’m not mistaken. Has this happened to him before? It’s not the first time you play against him.

— It did not happen before when we played against each other. If you noticed his second serve is very powerful. He takes risks. Alexander Bublik sometimes also serves the first serve at 200 km/h +, and he also  serves his second one at more than 200 km/h. I think this was exactly how Egor made his third double fault – taking risks. The third double was risky. I didn’t have such experience playing with him, but maybe he did it sometimes before.

— As far as I know, today is your first win in the ATP tour this year. It’s was hard to believe while watching your tennis today. Does it feel like the worst is over?

— I am generally such an athlete who has ups and downs. I’ve always had problems with consistency. My ranking suffers as a result. The worst is over, I am sure, because the clay part of the season is over. This is a joke, of course, but it is more pleasant for me when we start playing indoors. I have more confidence playing indoors. But to be honest, today I was very nervous, especially in the second set, when I made a break after these three double faults. I got really nervous. The history of my defeats affected had an impact on me today.

— You know perfectly well the potential of Daniil Medvedev, Karen Khachanov, Andrey Rublev. Two of them are in the Top-10 right now. This time Karen dropped out of the Top10. Do you think there are chances to see the three Russians in the Top-10?

— I have no doubt about it. These guys have everything to achieve this. Two of them are already in the Top-10, Karen was actually the first to crack the Top10 before. He was the first who made it to the Top10. I hope there will be three Russian players there at the same time, Karen will return to the Top-10. In my opinion, Andrey is not at his peak yet. I think you’ll see him winning tournaments again. I think these guys are not only the future of Russian tennis, they are the future of world tennis. I know them well. They have a kind of tennis that is head and shoulders above many other guys.

— What are your goals for the rest of the season?

— This year I do not set any specific goals before myself. Since the second part of the season didn’t start too well for me – the one after the pandemic. So now I just want to find my range, to be ready mentally in order to play in a more calm and confident fashion/

— Describe your feelings when you held the triple matchpoint- when the score was 6-3 in the tie-breaker. What was your psychological state at that moment?

— That’s the whole thing. When you start to play match-points more conservatively, your technique changes completely. You begin to play more carefully. It’s good that I know about it and it helped me in the tie-break at 6-4. I understood that I couldn’t take a step back. Even literally in order not to stand behind the baseline. And I forced myself to move into  the court when I saw that there was a chance to hit I down the line. Psychologically it was very difficult.

— A question about the ATP ranking. This year, it seems to be frozen for two years. Do you think that this temporary ranking system favors your position in it? What do you think about this system?

— You know, I didn’t make any calculation regarding it. I’m not the type of person who would try to calculate everything.  I just adapt to what happened. I didn’t consider how many points I had left for the next year, how they would help me, where they would get me in the rankings. I am trying to work on my game, focusing on my matches. I’m not trying to improve the position in the ranking, but to improve the game in a match, because I know that I have a good game at practice sessions. If it will always work in matches, then I think I can rise in the rankings, no matter what decision they make regarding the system.

— Last year Andrey Kuznetsov was your coach at this tournament, and now he has returned to the tour, that means he became one of your opponents on the tour. How did you two take his decision?

— From the very beginning of our cooperation, it was immediately clear that Andrey would return. It seems to me that I was one of the first, besides all the relatives and wife, who told him that he had a chance, health permitting, then he definitely should return. I have never in my life obstructed this decision; I just tried to support it as much as possible. As soon as he said that he wanted to try, I said: “Of course, no problem,” and we parted quietly, we had such an agreement initially. We laughed about the US Open – about the fact that my coach went through more rounds than I did. In fact, I’m happy to have him back. Andrey is a wonderful person, but the most important thing for him is to stay healthy. His real level is higher than Top100, he is playing at least on the level of Top50, and then everything will unfold depending on his health. He plays very well, and if everything will be fine, next year you will see a lot of new people in the Top100, including him.

— How do you assess your physical and mental state after today’s match and after the break due to the pandemic?

— My physical state is perfect. From the very beginning, as the season began, from Cincinnati, from the US Open, my physical shape never let me down. I spent this pandemic pausevery well with my coach, Dino Ragulich, who trains in Moscow. This coach is a great find for me, he helped me to raise my physical level, so I feel very well. I am ready to play for a very long time. I think I’m fine, the main thing is to play. There was a big difference between my psychological state before this match and after. Because before the match, during the match, it was probably also noticeable, psychologically I wasn’t strong. But I hope that after this match I will be more confident.

— Mikhail Youzhny actively rooted for you today. In Dubai Mikhail was in your box, and you played very well, you beat Roger Federer in that match. How important is it for you when Mikhail is supporting you during your matches? Does it have an impact on your game?

— There is no doubt about that. I can even say that, if he hadn’t been on there for me in 2017 in Dubai, I wouldn’t have won that match. It’s just a fact, I really wouldn’t have. Today I also thought about it, I told myself: “Apparently, today I will play well, because Mikhail is watching.” In fact, I’m really grateful to him, because he always tries to watch my matches, whether at the US Open or in Rome – he always tries to come and watch. His support makes me feel more confident for sure, it isn’t very strong, but with him it gets stronger.

— In April, during the pandemic, you fathered a second child. Has your parenting experience changed anything in you? Did parenting help professionally?

— In the beginning, definitely yes, it helped. Because I have always had priorities and tennis has always been my first priority. But when the family gets bigger, then there are no questions about what is now a priority. You start to feel more relaxed about tennis, that’s why at first it even helps. But then you lost a couple of matches during this pandemic, and you already understand that in tennis, everything can be reversed – even when you became a father twice. And this self-doubt and anxiety is starting to return, which was even before I had kids. But then you care and worry more about other things, so you start thinking: “If you lost one match, it’s okay, let’s continue to work, the main thing is that everything is well with children”. In this regard, it has probably become a little easier in tennis, because I’m not too concerned about losing. But when I start losing a lot, then I begin to have more doubts, and then it’s hard to get out of this mental trap.

— Your teammate, Andrey Rublev, who was here at a press- conference not so long ago, said that tennis players are definitely not the ones to complain about the current difficulties and restrictions caused by the pandemic, because there are people who find themselves in a much worse situation than the tennis players. What do you think about it?

— I wholeheartedly agree. I know what he was saying. My parents live far away, in the Krasnodar region, and they say that things haven’t been easy with jobs. This is a serious issue. For sure, tennis players shouldn’t complain about the restrictions, but people should understand us as well. When I lost at the US Open, we were there for two weeks. And everyone said: “Donskoy lost, earning easily $50k, and left”. Nobody thinks about how much salary I had to pay off, that I spent $12k for three rooms in a hotel for two weeks. Of course, I have earned some money, too. But then at such moments, during a pandemic, you simply survive with this money. So that’s how you live. In any case, I am certainly not complaining, I never complain, and I am not going to complain. There are people who are in much more difficult situation due to the pandemic and such people probably need more help with that. 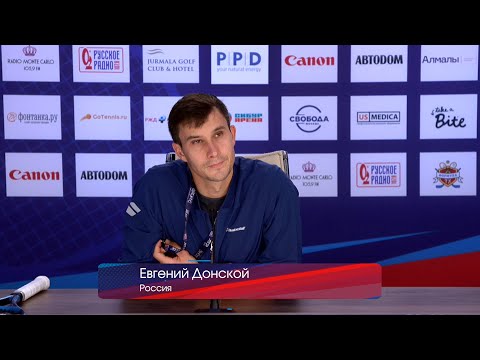