Evgeny Donskoy: “The match against Viola wasn’t not that easy”

Two standard questions: what do you make of the match? From our perspective, it seemed that you had an easy win. And the second question is – in the next match you will play against Daniil Medvedev, what do you think about it?

Today’s match against Matteo Viola seems easy score-wise. I can’t say that it was hard, either, but it wasn’t that easy. There were some nervous moments. Though in the second set it was much easier to play. As to the next match against Daniil… We all know how he he’s been playing over the past fewweeks. But I am sure I will have my chances. And I do have them. Let us see, how he is doing, how I  feel myself on the court. Anyway, we will fight for the victory. There are no any other options left.

There was some information that you were planning on playing quallies at this tournament. When did you find out that you were handed a wild card? How were you preparing? Did you change anything in your preparation process regarding this news?

I entered qualifications anyway, because you have to do so in advance. I said to the tournament director Natalia Kamelzon, that I will play the tournament for sure. From the start I made it clear, that if there are any other plans regarding that wild card, it is okay. We communicate very well with her. And I would like to thank her for still believing in me. Officially I found out about the wild card after the US Open. But, honestly, even before that I assumed that this would happen, because Natalia Kamelzon gave me a hint a bit earlier over the phone.

Your coach-consultant now is Andrey Kuznetsov. How did this collaboration begin? When did you decide that Andrei Kuznetsov is just the right person to help you?

I have been thinking about this for a long time after Roland Garros. Well, as I thought … It’s just that we (with the previous coach) Boris Sobkin we had a break … For financial reasons… I am extremely grateful to him for everything he did for me. He always said very kind, saying he would help me, that he knew that there was a financial problem. But of course, he has other things to do. I know that he helped me too much, and I even felt uneasy at some point. Then I started to train alone at first, and sometimes Andrey would come to practice sessions. We trained together – well, to the extent he can play despite his injury. Sometimes he was just prompting me something, and I realized he had a lot of ideas, especially with respect to those game components which are my weak points – those very components he is much better at. Sometimes he himself gave me some advice. And then I myself began to ask him for more. He gave me advice once, then twice, and then he told me lots of cool things. I liked it. I thought – why not give it a try? And he agreed. Thanks to him for that. Let’s see where this leads us to.

To be honest, it always takes me long to get used to these courts – not even to the courts, but more like to the balls. It’s kind of odd. Andrey saw that I was freaking out a little. He no longer gave advice on tactics to me on how to play against a specific player, although he did that too. We studied his game [of Matteo Viola], analyzed videos with his matches , everything was very well worked out by him (Kuznetsov), as always. He is always striving for perfection. So he took the initiative to tell me some things. He tried to calm me down somehow, to bring me into such a state so that I could sense that nothing terrible was happening. Because at the practice session I did not feel so confident. Basically, I did great during this match. I felt confident, just with some slight share of nervousness.

You have already played against Viola in 2014. Do you remember that match? Did it help somehow?

Andrey asked the same thing – “Do you remember this match at all?” And I don’t remember it at all. If someone reminds me, I don’t know, for example, what tournament it was. I remember very well the 2012 Challenger in Morocco. I was losing to him 5/2, 15:40 on my serve. Then Marat Safin helped me. And he said to me before the match: “Well, I don’t know Viola, but he is Italian, so he will have such a cutesy technique … And at the last moment he will choke, and you will have to fight to the end as he won’t be able to close the match. I was losing 2/5, 15:40, but in the end I won 7/5.

Medvedev in New York played seven matches. How many matches have you watched? And did you ask your coach-consultant if he remembers something from his match against Medvedev at the Kremlin Cup 2017?

I did not watch all the matches. I watched some part of his duel with Wawrinka. I watched some part of his match with Lopez. I didn’t watch at all Daniil’s match against Kopfer. But then I watched the semis against Dimitrov quite a lot. Yes, of course, I’ll ask Andrey. But I think that now Daniil is already a completely different player as compared to how he played then (2 years ago in Moscow against Kuznetsov). Let’s see, we will study. Yes, and we practiced a lot with Daniil. It’s not a secret for him how I play, and it’s not a secret for me how he plays. So I think that in terms of tactics this will not be difficult.

The player’s party was held yesterday – we didn’t attend, so please, share your impressions with us!

It was cool. For me, this party was the coolest of all the previous five tournament editions. We really liked how the singer sang. I can’t remember her name as my memory fails me, but she has a very cool voice. And again, the MCs Alexander Belov did everything at the highest level. There were cool awards: Karen received the prize as “Daddy of the Year.” At the same time, there were also some serious awards: Rublev was awarded for “Breakthrough of the Summer”, Daniil Medvedev was named “Sensation of the Year”. I liked that Sousa was given an award, too. As always, all meals at the dinner were very tasty. The atmosphere was slightly more relaxed than before. There used to be a hairstyle show – it was great, too. But this time it was all more informal, more relaxed and much more pleasant. 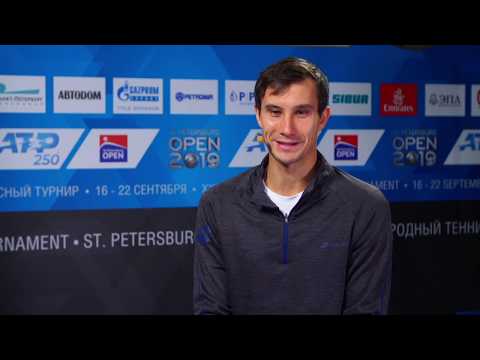 Evgeniy Donskoy ST.PETERSBURG OPEN 2019
17.09.2019, 20:06 #SpbOpen2019#EvgenyDonskoy#Interview#tournament
More news
«СТАНДАРТУ КАТЕГОРИИ “500” НАШ ТУРНИР СООТВЕТСТВУЕТ УЖЕ ДАВНО”
‘FOR THE FIRST TIME ST. PETERSBURG OPEN WILL BE HELD IN RUSSIA AS AN ATP 500 EVENT. THIS WILL BE THE MOST SPECTACULAR AND PRESTIGIOUS TOURNAMENT IN OUR HISTORY,’ ALEXANDER MEDVEDEV
VLADIMIR KAMELZON TALKED ABOUT KEEPING SANITY AS A VERY ACTIVE PERSON DURING SELF-ISOLATION
ДУШЕВНЫЙ РАЗГОВОР C МАРАТОМ САФИНЫМ
Borna Coric: “Medvedev Found The Right Key To My Game”
Share with friends!