24.10.2021, 16:45 #News #Best
On Sunday, October 24, the Kids Day was held in the spectator area of SIBUR ARENA Sports Complex. Lev and Laina, mascots of women’s and men’s tennis tournaments in St. Petersburg, greeted young tennis player at the Kids Day within St. Petersburg Open 2021, which was held together with the ecological project #YaBeregu. Before the start of the main program, children could decorate their face with bright face painting. The hosts Sonia and Karina, familiar to us from previous tournaments, told the children about the importance of garbage sorting and other eco-habits that will help us take care of the environment on a daily basis. The children found out which waste sorting containers are located on the territory of SIBUR ARENA, and learned how to use them. The children had the opportunity to consolidate their knowledge in practice by participating in an iterative game “Fun sorting”, during which the children determined in which container garbage should be thrown to.
Do you know who holds the record for the number of broken tennis rackets in the history of this sport? Our young tennis spectators answered that and many other questions that Alexander Sobkin asked them during the tennis quiz. For each correct answer, the children received stickers with the autographs of the tennis winners of the St. Petersburg Open of previous years for the special magazine Tennis Stars Pack 2021.
After a short warm-up, the participants of the Kids Day went on a mini-excursion in the spectator area of the SIBUR ARENA sports complex, during which the children guessed the names of their favorite tennis players looking at the graffiti in the main hall and took memorable photos in the special photo zones of the tournament. Sonia and Karina told the guys about the contests #Iamthebestfan and #thebesttennisblogger that allow any spectator of the tournament to win a commemorative prize.
Then a science show awaited the children, during which the invited scientists set up a real chemical laboratory and showed various experiments to demonstrate how to use chemistry to deal with garbage and environmental pollutants. Most of all children were impressed by the tricks with electricity, during which real lightning made sounds of familiar melodies. The science show was followed by a magic one with a real magician who made objects fly, water evaporate, forks bend, and fake coins disappear.
The Kids Day finished with a meet between young participants and Ilya Ivashka, world №43. He answered all the tricky questions that the kids have prepared for him, reminded them that discipline is key in any sportsman’s success, talked about his ways of mastering worries on court and gave advice to aspiring tennis players. He finished his speech with parting words: «Enjoy anything you are doing. If you enjoy playing tennis then everything will be possible».
All participants of the Kids Day souvenirs from recycled plastic.
Video 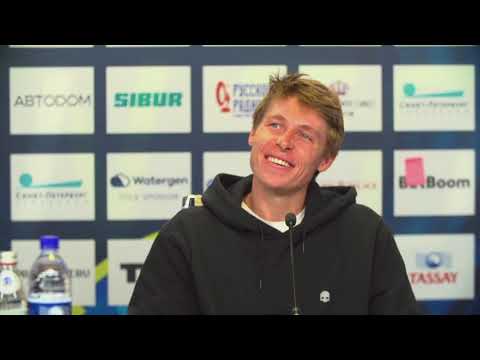