DENIS SHAPOVALOV: “PSYCHOLOGIST TELLS ME RUSSIAN ANECDOTES, BUT I DON’T REMEMBER THEM”

— How easy was the match against Viktor Troicki for you?

— I don’t think first round matches are easy, especially against Viktor. I’ve already played against him a couple of times, and he is a very difficult opponent. In fact, it was a very tough match, I just think I played great today. I couldn’t have played better.

— We know that you are currently working with Mikhail Youzhny. Could you tell us how does Mikhail present you information, how does he analyze everything and present it to you?

— He doesn’t give me complicated information. On the contrary, he explains everything in simple words about the game, about the opponent, so that I could just focus on my game. To be honest, I don’t think I need to think too much about my opponents right now.

— You had to play with Sam Querrey first, but then your opponent has changed. How did you take it and did you prepare to the game against Querrey?

— Yes, of course, we were preparing for the game against Sam: we were returning a lot, Mikhail stepped into the court so that the serve would go stronger. We worked hard. But this is something that happens quite often in tennis, when someone withdraws and you have to play with someone else. We quickly readjusted. I’ve already played with Viktor a couple of times, I already knew his game, but Mikhail (Youzhny) also helped me a lot with this match. We just changed the game plan and got ready to play against Viktor.

— Your next opponent is Ilya Ivashka. You had a meeting with him in 2017 in Shenzhen. You managed to win back then. What can you say about this opponent?

— I think it will be a very difficult match, especially on these slow courts. Ilya gets a lot of balls and forces the opponent to play more balls, so I think I will need to have a long rally and try to win points from the very first shot.

— You said you were working with a psychologist. Please tell us what kind of work is that? Is it some kind of breathing exercises or, for example, work on the reaction speed?

— First of all, I will go to Canada, because now it is very difficult for me to go there due to the fact that upon arrival I will have to go through a two-week quarantine. I would really like to go to Canada, I have not been there for a long time and it seems to me that I will not get there too soon. And it’s hard for me to say about the time when the restrictions will be lifted. I think the restrictions will continue next year, perhaps the situation will change little by little, but I don’t think this will happen in the near future.

— You played in the quarterfinals of the St. Petersburg Open 2018. Do you remember your feelings on being here two years ago and can you compare that feelings with those that you have now in St. Petersburg?

— It’s hard for me to remember the surface that was here two years ago, but this year the court suits my game well. I like coming and playing here, I feel like I am at home in St. Petersburg. Of course, it’s bad that we can’t leave the hotel room, nevertheless, I really like coming to St. Petersburg.

— Do you understand Russian sense of humor? Do you know any jokes in Russian?

— No, I don’t know any jokes in Russian. The psychologist I work with, Vadim Gushchin, always tells me anecdotes, but I don’t remember them. 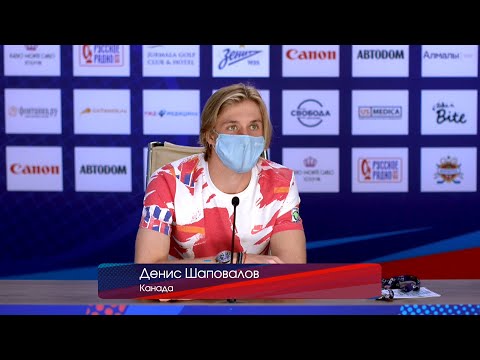