DENIS SHAPOVALOV: «THE MATCH WITH RUBLEV WILL BE TOUGH BUT INTERESTING»

— Denis, in your on-court interview you have said you were a bit nervous when the score was 15:40 and you were serving for the match. What did help you to play actively on these points and to save these break points?

— I tried to play both these points from my first service. I started to make many errors and decided to make one step back and to calm down. I am happy everything went well.

— It seemed from aside that you were just playing your game without watching your opponent. Is it true?

— I always try to play my game but sometimes it is difficult especially when you are playing against such an opponent like Stan who can also hit powerfully.

— At Roland Garros you have criticized how the bubble system was organized. What about St. Petersburg? Do you feel yourself safer when the rules are strict and everything is prohibited or when it is all sort of more lenient?

— I think everything is well organized in St. Petersburg. People measure your temperature everywhere, the social distance in observed. The organization is better here. Many players didn’t like how it worked at “Roland Garros”.

— The public opinion has divided into two parts, including in Russia: some people say the pandemic is nothing serious but most people think it is dangerous and they are trying to follow all the restrictions. What is your opinion?

— I think it is very serious. Perhaps, it is dangerous not for everyone but there are people who are definitely in danger and they should be very careful. Nobody knows how he feels this virus. There could be no symptoms or recovery could be very long and tough.  I think people should take it more seriously.

— Tomorrow’s match against Andrey Rublev is one more chance for both of you to book a berth for the ATP Finals in London. Do you think about it?

— Yeah, I think Andrey is one of the best players on the planet right now. He was playing very well at the last couple of tournaments. I suppose tomorrow’s match will be very tough. Sometimes our game style looks the same, we both play aggressively and we like to hit winners, so it’s gonna be tough but interesting.

— A Roland Garros Stefanos Tsitsipas presented his collection of masks. Don’t you think of creating something like that under the Denis Shapovalov’s brand?

— I thought of it but first of all it is not easy, secondly, I am not sure whether it is cool. I’d prefer a T-shirt rather than a mask.

— Reilly Opleka said Andrey Rublev is a nice guy. But you, Denis, are a nice young guy too.  The English proverb says: «Nice guys always come last». Is it correct?

— I think no. In everyday life we can be very nice fellows, but not on the court because both of us are aiming to win.  Reilly is right about Andrey, he is one of the nicest guys on Tour.  We get on well.

— Today you made seven double faults. Why were that risky on your second serve?

— Ask Misha Youzhny (laughter). I don’t know Stan was staying close and I felt I had to serve stronger against him. But I didn’t feel well on my second service today. 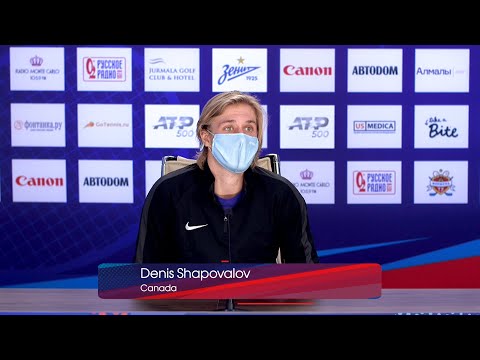