DENIS SHAPOVALOV: “WHEN I AM PLAYING UGLY I DON’T FEEL COMFORTABLE BEING ON COURT!”

Please, comment on today’s match against Pablo Andujar. How long did it take to adapt, find your game and start playing the way you can?

I was not happy about the draw from the beginning because Andujar is a difficult opponent and I was preparing myself for a tough match. I did not feel too good at the beginning, but I gave myself some time after the fist set, tried to composer myself and change my game style. After that I managed to turn the tide, I started playing better and closer to the end of the match I felt calm and confident.

I don’t know if you will agree with this idea, but if you had to play an opponent from a higher level – like Medvedev, Zverev, Rublev or Khachanov – you wouldn’t have so much time to adjust. If you will encounter higher class opponents farther down the draw you will have to find your game faster.

Of course, I agree. This is why it is good to be a seeded player – I do not encounter such opponents in the 1st and 2nd rounds. After you enter the tournament and start playing matches, you gain more confidence and it is easier for you to find your game. It is always tough during the first round, especially taking into account that your opponent has already played some matches and found his confidence.

We saw not only Mikhail Youzhny, who is working with you closely, in the stands but also his former coach Boris Lvovich Sobkin. Does he take part in the training process?

No, he is only present as a consultant. He is very good to me and Misha asks his advice quite frequently and he can also give his advice to me.

In the third round you are facing tough opponents whom you met before. You have only two wind out of four head to head with Jan-Lennard Struff, you lost to Alexander Bublik recently in Madrid – with whom you would rather meet on court? And do you study your opponents’ statistics before the match?

Of course, I look up the statistics and watch matches. It will be tough with any of them, I fell to them in our last matches. On the other hand, during my last match against Struff I was playing well, I have found a key. It didn’t work out so well with Bublik but I think I just was not lucky enough. I think, I can beat any of them and I believe in myself.

Usually you do not play doubles, but here at St. Petersburg Open you are going to play with Rohan Bopanna, with whom you last met at Indian Wells. Why did you choose him as your partner and decided to play doubles this year?

We are good friends with Bopanna, we played three years ago at Indian Wells and we enjoyed it. He helped me a lot and gave a lot of advice concerning my game, so we are just using this tournament as an opportunity to play together.

Daniil Medvedev, who beat Novak Djokovic in three sets told him that he is the best modern day tennis players and that was not meant as a compliment, but as a fact. You played Djokovic at Wimbledon and lost to him in 3 sets, do you agree with this opinion?

This is a very arguable question. Of course, if you look at the results he is the best out of three, but each player there has his own style and it is very hard to compare them.

You play very beautiful tennis – the audience and all the broadcasters noted that. When you are playing beautifully you are enjoying yourself. Have you mastered the art of “Winning ugly” which Brad Gilbert explained as winning at all costs even if you have to play ugly? Can you play like that?

I have not mastered it yet (laughter)

Did you read the book?

Yes, I have read it, but I can not play like that. When I am playing ugly I do not feel comfortable being on court, that is why winning like that is hard for me. I think that when I am feeling good, when everything flows it is very hard to outplay me. Maybe it will change over time and I will start winning even when I play ugly. Of course, there are no matches where you are doing everything perfectly and then all of it just falls into place. You can even take today’s match: I started badly, missed a lot of shots on the right side, served badly, but I still managed to turn the tide. Though I could not say that I played ugly, because in the second and third sets I was playing pretty well. That’s why I wouldn’t say that I agree with the book’s main point. I think you should search for your way and for what you have to do to play greatly.

Mikhail Youzhny has released a book recently. Have you had a chance to read it? Did you like it? What type of books do you usually read?

To be honest, I do not read a lot. For some reason I fall asleep when I read. And even if I read I am mostly reading in English, it will take a lot of time for me to read it in Russian. So I told Mikhail that he has to either read it to me aloud or translate it into English so I will be able to read it. Of course, I would love to read his autobiography. I think that he had a great career and a lot of things happened in his life while he was still playing, so it would be very interesting to read about it.

Who of the Russian tennis players are you friends with on the tour?

Do you agree that Alexander Zverev, Stefanos Tsitsipas and Daniil Medvedev have taken the lead among the younger generation in tennis? You are still a little behind this trio. Do you agree with this? If so, what do you need to do to become a member of their “club”?

I don’t agree with that. I think everyone has one’s  own way. Do not forget that I played in the semifinals at Wimbledon this year, and I think this is a great achievement, a big step. Perhaps they show more stable results, but I wouldn’t say that they play better than me, even if you look at our Head2Heads – we all have quite equal results. It seems to me that everyone goes their own way. Maybe one year they play better, the next year I will play better. This is how I see it. 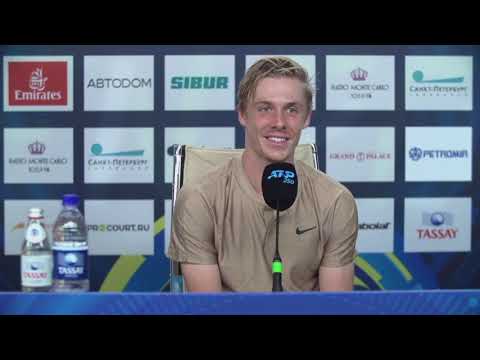 Press-conference with Denis Shapovalov St. Petersburg Open 2021
27.10.2021, 16:10 #spbopen2021
More news
SHOTA MIRILASHVILI, CEO WATERGEN RUSSIA: «The exquisite elegance of tennis is associated in full harmony with our company!»
BOTIC VAN DE ZANDSCHULP: «I HOPE RUBLEV WILL REMEMBER ME NOW»
MARIN CILIC: «I STILL HAVE THE ENERGY FOR THE SEMIFINALS»
ANDREY RUBLEV: «BOTIC PLAYED A GREAT MATCH AND WAS AT HIS BEST WHEREAS I JUST PLAYED AS USUAL AND IT WASN’T ENOUGH TO WIN»
JAN-LENNARD STRUFF: “I’D LIKE TO FLY OR TO MOVE THROUGH SPACE ON FLICK”
Share with friends!