DENIS SHAPOVALOV: “IF YOU GIVE RUBLEV A CHANCE, HE WILL TAKE ADVANTAGE OF IT”

— Denis, you played great in the first set, what didn’t work in the second?

— Yes, I started well, but then my opponent managed to raise his game. It happens sometimes. I think it was a great match and we both played great.

— It seemed that the match was divided into “before” and “after”. Until the third or fourth game of the second set, you played brilliantly, then there were more errors. Did it knock you out mentally, or did Andrey started to play better?

— At first I lost my attention during my serve, and then Andrey started to play better. He’s in a really good shape now. If you give him a chance, as I gave today, he will take advantage of it. I had a chance today in the third set to make a break, but I didn’t use it, and then he just played great.

— You called the physio on court. Whatever happened to your shoulder?

— Yeah, in the second set I was tight. I started to serve more and my shoulder got tight. Nothing serious.

— It is very sad to lose, but what positive aspects can you find in your run at St. Petersburg Open 2020?

— I think it was a good tournament. I have played three good matches and losses sometimes happen. I started the match well and Andrey is in good shape and he deserved to win. It was an awesome fight. I like to come and play in St. Petersburg. I’d like to come back here next year. 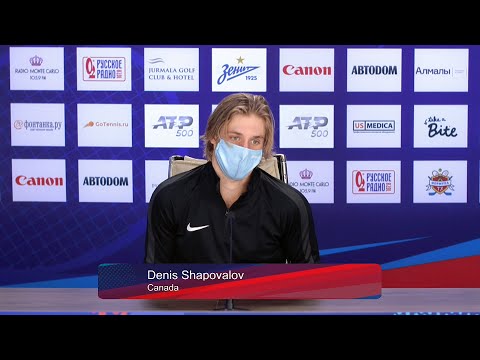