DENIS SHAPOVALOV: “CROWD HERE LOVES ME, AND THIS HELPS ME A LOT”

– Denis, could you please comment on your victory over Ilya Ivashka today?

– I am in a good shape now and I played really well today. I am very happy to go through to the next round of the St. Petersburg Open 2020.

– It seems like the modern tennis is powerful tennis, consisting of powerful shots at the base line, bounces; there are a lot of baseliners, who use all the court and advance to the net. When you were a very young tennis player, did you play like that too?

– Yes, I think I’ve always played like that. Mom always told me to advance to the net. When I was a junior, everyone lobbed me over, because back then I was short. Then my mother told me that one day I would become taller and then I would have something to beat my opponents with. I am very glad that I have been playing like that since I was a kid and now I can show this kind of tennis.

– No, I don’t like boring tennis at all. I hate just standing behind and hitting the ball, on the contrary, I love advancing to the net. When I was younger, I loved watching Roger Federer’s matches. He also often advances to the net, so I mirrored him to some extent.

– The first game in the match against Ilya Ivashka lasted 7 minutes, you played a lot of break points there. Can we say that this was one of the key moments of the match?

– Yes, that was an important point. I think he played the first three points perfectly. I’m glad that I played well because it was a key game and it helped me in the first set.

– You said that you know how to play against Stan Wawrinka. What do you think about his shape at the moment? What are your chances in tomorrow’s match against him? What will you need to do to defeat him?

– Wawrinka is a very tough opponent. I think he is in very good shape now. He played two difficult matches in this tournament. I think I’ve met him twice already. It is especially difficult to play against him when he feels confident. I think tomorrow will be a difficult match, but I think that I am also in good shape, and I also played very well in two matches here.

– Mikhail Youzhny (your coach) and Stan Wawrinka (your next opponent) head to head is 3:3. Do you think that the fact that your coach has faced Stan 6 times on the court will help you tomorrow?

– Mikhail knows almost everyone who is playing on the tour now. He played with them not so long time ago, so his help will be very useful to me. Moreover, Mikhail watched Stan’s matches so this will also be useful before tomorrow’s match as well.

– Tell us, please, how is your mother helping you now? Does she give advice on tactics or she only play the role of mother now when you are working with Mikhail Youzhny?

– She helps a lot but more often she talks about tennis with Misha than with me. When she travels with me she gives advice on tactics, but when I am with Misha, she gives him the opportunity to work and just consults with him. When she is with me she behaves as a mother mostly, not a coach.

– My question is about fans. Are there any of your fans who follow you from tournament to tournament, from city to city? Do you have a special or unexpected gift from your fans?

– Fans from Japan often make gifts. A fan presented me a lot of elements of Japanese uniform. I think that I am a lucky person because I have a lot of fans all over the world. That is why I feel great wherever I play, especially here in St. Petersburg. The crowd here loves me and this helps me a lot.

– Denis, your Russian language skills are getting better. What helps you in studying Russian? Maybe you read books in Russian?

– It’s hard for me to read books in Russian language. I will read them very slowly. Conversations with Mikhail and with my parents help me improve my Russian language skolls. At home we always speak Russian. 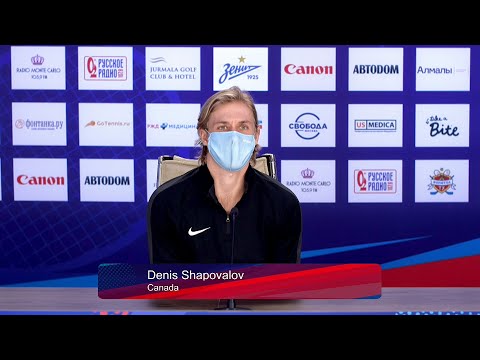