Daniil Medvedev: “The match was even, but I managed to win in two sets”

– Was there any game plan before the match?

– Yes, of course, with every opponent I play with, I try to think about his weak and strong points. I knew that my opponent, most likely, plays a bit worse from his backhand and generally plays less aggressively from his backhand, so the goal was to start the rallies playing to his backhand, and then see how the rally goes.

– You played an interesting match today – it was, no doubt, useful for you. If it’s not a secret, what conclusions did you make after today’s game, considering your opponents, conditions and colossal support from the crowd?

– In fact, here it is rather important not to think so much of conclusions you make after the game, but that the first match, as everyone always points out, is the most difficult because matches are played non-stop on center court, and if you want to practice there, then you need to train at 9 AM, and at 9AM you also wanna sleep well. Therefore, when you go to the center court, you need to get used to the atmosphere and get a feel for how the ball flies there. And sometimes that’s why we see sensations when players of higher class would lose in the first rounds. That is it was very important for me to win. Generally, I didn’t spend so much time, I got used to the court, entered the tournament – this is the most important thing and, I hope, I will play only better and better.

– In the first set, when Donskoy broke back, it still seemed that you were playing with much greater confidence, and in general it seemed that you had such a degree of confidence… Half a year ago you would tighten up in such situation, while now you just play calmly and win.

– Yes, it is true, and it is completely normal. My run at the US Open was the result of the three tournaments I had played in Montreal, Cincinnati, Washington –I kind of understood that I was playing not cool, but quite well and today at some important moments I really was more confident than Evgeny. This affected the game today, because the match was even, but I ended up winning in straight sets.

– In the next round you may play against your fellow countryman Andrey Rublev. Can you explain why there are so many all-Russian matches at St. Petersburg Open 2019?

– On the one hand, it is very cool for the audience when two Russian guys play in Russia. Of course, when we were all at the draw ceremony and watched as we all fell into the same quarter of the draw, I immediately joked that if Karen had not been second seed, he would also have gotten into our part of the draw. But I will be very happy if Andrey wins (against Berankis). It is always difficult to play against him, but interesting. I’ll be getting ready, and I hope there will be some good tennis!

– Andrey Rublev said, that he likes Coca-Cola. Do you have your favorite drink and how often do you drink coke with Andrey?

– My favorite drink is ice tea. It doesn’t matter if it is “Nestea”, “Lipton” or anything else. I just like ice tea. I can’t say that I can’t leave without that drink, if I won’t have a chance to drink it in for a month. I won’t die for sure. But it is much harder to leave without desert – I really love panna cotta!

– Today in the stands there was a record attendance for the men’s tournament on a Thursday evening. Obviously, many came on purpose to watch precisely your game. How do you find it, and how do you feel when you realize that now people come to watch your game like you watch a superstar, just like people came to see Sharapova’s game in February at St. Petersburg Ladies Trophy 2019?

– It is very cool! In the past not so many people used to go to the matches, although we were already Top30 or so. We discussed it in tennis circles that it was a pity and we would really want to play in front of a fully packed home stadium. We wanted people to come to cheer for us. And I achieved this at the end of the day thanks to my latest results. And it feels really nice. And I hope that people will only watch tennis more and cheer for us even more!

– Did you feel support from the crowd?

– Yes, of course. When I stepped on the court, I saw that the stadium was almost full to its capacity. People were cheering for us, they liked the match from the very first game – I could hear and see that. In fact, I believe that the crowd supported both of us, which is right, because Evgeny [Donskoy] is also from Russia, and cheering for just one of us wouldn’t be right.

– You signed a contract with BMW and you mentioned before in interviews that BMW is your favorite automobile brand. What can you say about this event in your life?

– It is really great. I want to be associated with such cool brands, and cooperation with BMW for me was really a dream come true, because my first and only car was a BMW, and I really like my car. I am very happy about this contract and I hope that there will be even more cool projects ahead.

– St. Petersburg is the cradle of Russian tennis. Does this thought inspire you to play here?

– To be honest, I didn’t know that. Anyway I don’t know a person who doesn’t like the tournament or the city, everyone especially the Russian guys do like it a lot and are happy to come back and they say that St. Petersburg Open deserves a higher category than ATP 250. The organization, the hotel and the city itself are very good.  It is difficult to find the right words, everything is awesome! Starting with the hotel which is situated in the very center of St. Petersburg, next to St. Isaac Cathedral and the hotel is unbelievable inside. Even when you come there without coming to “SIBUR ARENA” you understand that the tournament is special.

– Not so long ago you said you devoted yourself to tennis totally, that was only 2 or 2,5 years ago. Does it mean before that you were doing something wrong and maybe you can give advice to the young generation so they could escape these mistakes?

– It all depends… If you’re going to think only about tennis starting from age 10, by 18 years old you can go nuts (laughter). It doesn’t mean I did something wrong. I had my usual 8-hours practice, I was working hard and got tired as well. Yet, during tournaments I would allow myself watch to watch TV series till 2 AM and then maybe I would even win the next match and I wasn’t thinking of the bad impact such regime influence. But once I understood I’d like to try to do everything right to feel myself better on court to win more matches.  If it didn’t work, I honestly don’t know if I’d be going on with this enthusiasm but it brought results immediately, that is why I continue to stick to such rather strict regime.

– After the Washington final Nick Kyrgios came up with different nicknames for you. Which did you like most?

– I’ve already said that I think Nick is a good guy, but he sometimes he is going over the board on the court and that’s not good. The favorite nickname? He called me the beast and machine. I remember how my coach and I we were leaving the stadium in Cincinnati after my match and Nick asked my coach: “Does the machine sleep at all?”. “No, he answered, I recharge him at night. He doesn’t sleep”.

– What was your best match over the year in your opinion?

– The best match should be the one I won. It was the match against Djokovic in Cincinnati I suppose. The first set was tough, I was so tired. I didn’t see the options for a win and thought that I’d lose. He was in a great shape and played out of the world. But I’ve caught a spark and the crowd was behind me. I turned things around and played some crazy tennis in the second and third sets.

– Daniil, you’ve almost perfectly got used to control negative emotions on court. You have already talked about this, but tell us, please: how hard is it and in which moments you will not restrain yourself from breaking your racket?

– In fact, the more you do it, the easier it turns out. That’s normal. The more you lose your temper, the harder is to stop it, and the easier you will lose your temper again. Everyone knows it too, but it’s hard to resist it. And I really worked on it very seriously. I always answer this question in the same way- I hope there will be as many matches as possible, when I would in a good mental state. Definitely there will be matches when I would probably break rackets, or do something else. And I have to work on it. 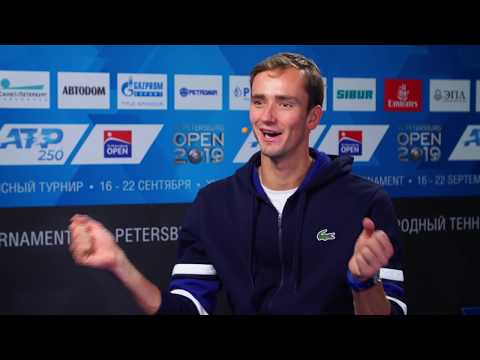 Daniil Medvedev ATP ST.PETERSBURG OPEN 2019
19.09.2019, 20:15 #SpbOpen2019#DaniilMedvedev#Interview#tournament
More news
«СТАНДАРТУ КАТЕГОРИИ “500” НАШ ТУРНИР СООТВЕТСТВУЕТ УЖЕ ДАВНО”
‘FOR THE FIRST TIME ST. PETERSBURG OPEN WILL BE HELD IN RUSSIA AS AN ATP 500 EVENT. THIS WILL BE THE MOST SPECTACULAR AND PRESTIGIOUS TOURNAMENT IN OUR HISTORY,’ ALEXANDER MEDVEDEV
VLADIMIR KAMELZON TALKED ABOUT KEEPING SANITY AS A VERY ACTIVE PERSON DURING SELF-ISOLATION
ДУШЕВНЫЙ РАЗГОВОР C МАРАТОМ САФИНЫМ
Borna Coric: “Medvedev Found The Right Key To My Game”
Share with friends!