DANIIL MEDVEDEV: “IF YOU KEEP AN OPPONENT ON HIS TOES, YOU WILL MOST LIKELY WIN”

— Daniil, your first set wasn’t bad either, just some little things didn’t work out. What was the main thing for the victory over Richard Gasquet in the second and third sets?

— I started off a bit quickly, but I think I played well in general. It seemed that I was controlling the game, so I decided to continue at this pace. I lost the first set with one bad game and some minor errors. I was in a hurry and played along the line too often. Then I decided to play more in the court, in order to understand his game style. I tried to make him to speed up the game first, so that I would act accordingly. It worked very well. The second and third sets went without break points. I always kept him on his toes during his serve, in tennis this is the most important thing. If you play without break points and keep your opponent on his toes, you will most likely win.

— Have you heard the shouting in French with a Russian accent coming from the stands of SIBUR ARENA: “Allez Richard!” (“Come on, Richard”). Were you annoyed by it or does this mean that the crowd spitted in their preferences objectively?

— I was a bit annoyed by this. It’s a little bit strange for me. I can say that in France they often root for me when I play against a foreigner, because they still know that I speak French and have lived in France for a long time. At the moment I train in France and live close to it. When I play with the French, then the stadium fully supports the French. In fact, despite the fact that someone was shouting phrases supporting Richard, the most of the crowd was rooting for me, and it was very cool.

— Alexander Bublik during his press conference said that he had the best time of his life during the spring-summer covid break. How was this break for you, how did you feel at during this period of time?

— Off court I am a person who tries to take things that are beyond my control, such as coronavirus, quarantine measures, neither with anger nor with joy. I can’t change that, so I just try to live as best as possible in the current conditions. During the coronavirus break, I trained as best I could to keep fit. We made our calendar with a coach. For example, we rest for a week, two or three. There was such a break once, three weeks without tennis. During this time, I was just keeping in good trim. Then, when it became clear that the tournaments wouldn’t resume soon, I didn’t want to be squeezed like a lemon when they would start. I neither was upset nor happy with this break. On one hand, I wanted to play the tournaments. On the other hand, I spent a lot of time with my wife at home, so there were advantages and disadvantages of this period. As in everything.

— Do you think that when the “pre-quarantine” times return, new tennis rules (no linesmen, no challenges) should stay or everything should be returned back to the way it was before the pandemic?

— It’s difficult to say. I think the world is moving more towards digital solutions in all sports. Of course, such system is more objective, as there is no human factor. There are no mistakes from linesmen’s side. Today Richard often asked the umpire whether it was out or not, but I didn’t understand why he was doing it, because you can’t challenge it. The automatic voice just tells you whether you hit in or out. I think this system is more objective anyway.

— At the tournament last year, you explained your progress using a different approach. You said that you have become more responsible for the schedule. One year has passed. Tell us, please, do you still use this approach? Does it still work for you, or maybe you discovered something new?

— Yes, I try to be a professional in my field. I can’t say that I am the main role model, for sure there are people who work more but I always try to do my job well . This is my life goal. I try to train inside and out, try to improve elements of my tennis, learn something new about our sport. Of course, it doesn’t always works. If we talk about the ranking, it turns out that now I am lower than I was last year. But I do everything possible. This is the most important thing for me in life, so that later looking back there will be no regrets.

— Let me ask you a popular question at this tournament: what will you do first of all when all restrictive measures will end? Is there something that you cannot do now due to restriction?

— Now due to restrictions we can’t leave the hotel during the tournaments. Traveling around the world we usually try to have at least one or two days to walk around the city center or go to a restaurant, try to have a good time to make a long story short. Now it is forbidden, so the first thing that I would like to do when the pandemic restrictions will end is going to the dinner with Russian tennis players at the restaurant in the city center.

— For many players coronavirus pandemic has become a time when they can afford trying something new. How did you spend this time?

— I haven’t tried anything new to be honest. I had more time to get involved in my wife’s hobbies. She loves art and design. She started taking online courses and I was also interested in it. I also tried to study it with her. We watched various films about painting, about the lives of artists, about the design. My wife did her homework, and I just asked her about the things  I was interested in. I can’t remember anything specific that I liked the most, but I definitely extended my knowledge.

— Daniil, some tennis players said that now you have got French gestures and French intonation even in phrases in Russian language. How advanced are you in French language skills? Do you understand French humor? We all know that it is the highest level of language proficiency?

— I don’t really like this fact because I like being Russian and I want to be even more Russian. I think that I will not live in Russia till my retirement from tennis.  I hope that after the retirement from our sport I will be able to return to Russia and be able to break all these French habits. If we talk about French language I speak French fluently. I guess I understand anecdotes and jokes, but if they are not funny for Russian culture, I ask Gilles (coach) to warn me the next time he jokes. 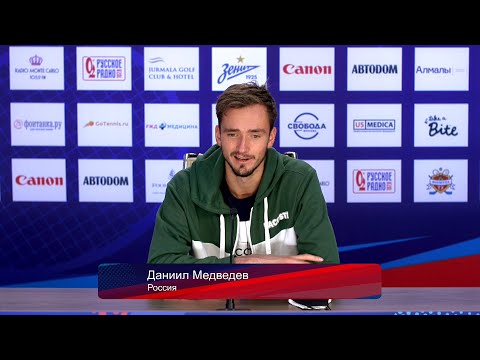