BOTIC VAN DE ZANDSCHULP: “IT WILL BE AN INTERESTING MATCH AGAINST RUBLEV TOMORROW”

Today you upset one of the seeded players of the tournament, someone who is big this season. What helped you to beat Sebastian Korda?

Could you share your overall impressions from the tournament and from St. Petersburg?

I think this tournament is very well organized. The hotel is unbelievable. I have to say that I like the city a lot; it reminds me a little bit about Amsterdam with all the water and canals. I’m happy to play here. The courts here suit my game well. Hopefully I can go further in the tournament.

Linguistic question: what does your name mean? In Russian “botic” means “boat”. Does it have any meaning in Dutch?

It doesn’t mean anything in Dutch. It’s not a Dutch name either, so I don’t have a definition or something. I’ve tried to look it up once on the internet, but couldn’t find anything.

You compared St. Petersburg to Amsterdam. Do you know that the founder of the city – Peter the Great – spent some time in Holland and he was learning navigation and maritime affairs from Dutch sailors?

Yes, I’ve heard this story. Actually, my girlfriend told me that two days ago. I’ve heard that he liked Amsterdam so much, that he built St. Petersburg in a little bit the same way with all the cannels and water. So, yes, I’ve heard the story.

You are to play Andrey Rublev. Yesterday at his press-conference, he remembered that when you were much younger in 2017 in Rotterdam you played against each other in the qualies and you beat him. What do you remember from that match? And what do you think about the upcoming match?

I remember the match, it was a qualifier in Rotterdam, I believe he was 100 in ranking at that time. I got a wild card I the qualification, he kicked my butt in the first set 6-1 as he played too powerfully. And after the first set when I started playing better, I won 6/3, 6/4 in the second and third. These days it is different I grew as a player and he grew as a player. I guess he is ranked  6th in the world at this moment and used to be №5. The tables turned but for me it is the same, from 2017 I grew as well, a lot has happened. It will be an interesting match we have to play tomorrow and we will see.

What is the name of your coach?

Peter Lucassen. He is Dutch.

What do you think impacted the results you showed this year? 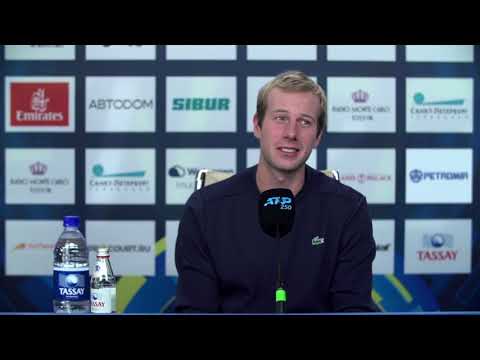 Press conference with Botic van de Zandschulp, St. Petersburg Open 2021
28.10.2021, 17:43 #spbopen2021
More news
SHOTA MIRILASHVILI, CEO WATERGEN RUSSIA: «The exquisite elegance of tennis is associated in full harmony with our company!»
BOTIC VAN DE ZANDSCHULP: «I HOPE RUBLEV WILL REMEMBER ME NOW»
MARIN CILIC: «I STILL HAVE THE ENERGY FOR THE SEMIFINALS»
ANDREY RUBLEV: «BOTIC PLAYED A GREAT MATCH AND WAS AT HIS BEST WHEREAS I JUST PLAYED AS USUAL AND IT WASN’T ENOUGH TO WIN»
JAN-LENNARD STRUFF: “I’D LIKE TO FLY OR TO MOVE THROUGH SPACE ON FLICK”
Share with friends!