Botic, we have an impression that towards the end of the match you were reading not only Andrey Rublev’s serve but also his attacking moves, is that right?

Yes, I think I have played a pretty good match. He started playing better closer to the second half, started sending more balls my way. But I must say that I returned well and read his serve. I think that I have done great work because he is one of those guys on tour who smash the ball as hard as they can. And I have also been strong during the rallies.

So if Andrey Rublev’s style is to smash the ball as hard as possible, what would you say your style is?

Good question. I think I am a pretty good server. I can play differently on the base line: aggressively, coming to the net and in a defensive tennis, if the circumstances are right. This is probably how I can describe my style. I would say I am a universal player.

A few days before Andrey Rublev said that he did not remember you from the match 4 years ago and he can’t even pronounce your surname. What do you think, will he be able to remember your surname now?

I think he will remember me but will still have trouble pronouncing my name.

You have some amazing wins against top-level players. Are you getting any endorsement offers? There is definitely an interest in you now?

Not yet, I am trying to figure all of this out. And actually I did not have any rest after the US Open, I played tournament after tournament. Maybe at the end of the season I will have some time to rest up and sort all of this out.

Kiki Bertens had already won in St. Petersburg twice and Matwe Middelkoop won a doubles title here and he is the pet of the local crowd, do you communicate with any of them? And do you think about claiming a title here as well?

I know them both, and, of course, we hanged out. Kiki is retired now, so I don’t see her that often and with Matwe we are still seeing each other. I want to win every tournament that I play at and St. Petersburg Open is no exception.

How do you estimate your chances in the next match against Marin Cilic? How should you play in order to get to the finals?

Marin is showing great tennis this season. He performed perfectly in Moscow last week. But I am in a good shape now, too. Marin has a strong serve, he is holding the rallies quite well. He won a Grand Slam, so he knows how to play semifinals and finals. It is a new experience for me at an ATP tournament and I hope I will be able to win. 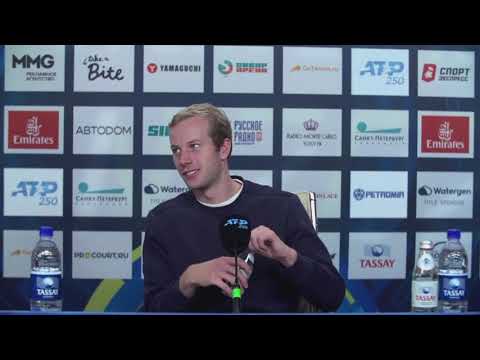 Press-conference with Botic van de Zandschulp, St. Petersburg Open 2021, 29.10
29.10.2021, 22:21 #spbopen2021
More news
SHOTA MIRILASHVILI, CEO WATERGEN RUSSIA: «The exquisite elegance of tennis is associated in full harmony with our company!»
BOTIC VAN DE ZANDSCHULP: «I HOPE RUBLEV WILL REMEMBER ME NOW»
MARIN CILIC: «I STILL HAVE THE ENERGY FOR THE SEMIFINALS»
ANDREY RUBLEV: «BOTIC PLAYED A GREAT MATCH AND WAS AT HIS BEST WHEREAS I JUST PLAYED AS USUAL AND IT WASN’T ENOUGH TO WIN»
JAN-LENNARD STRUFF: “I’D LIKE TO FLY OR TO MOVE THROUGH SPACE ON FLICK”
Share with friends!