– It is not easy to play against powerful servers like Reilly Opelka. Don’t you regret that he has stolen an opportunity from you to have a rematch with Daniil Medvedev as he beat the Russian in the previous round?

– No, I don’t. (Laughter). To be honest I don’t. I really respect Daniil [Medvedev] I think he is an unbelievable player. I am fine with this win to be honest. I was playing some of my best tennis today. In the first set I started slow as I have said on the court and I didn’t find my rhythm. I was not in shape but as the match progressed, I was playing better and better. I did find my distance on the return and also in the rallies I just think in general I was playing better tennis.

– Yesterday at his presser Daniil Medvedev after losing to Reilly Opelka said that when you play against such a big guy like him the key is the serve and the return. Do you agree with him or there are some other little nuances to take care of?

– The best comparison is that I am actually being healthy. It is the most important in 2020. I wasn’t really healthy in 2019 – I haven’t played since July 1, I think, I skipped Wimbledon and then at the US Open I was injured again. And at the end of the year I didn’t perform very well.
During this long (coronavirus) pause I needed to have a good preparation and I needed to put the work in so that my body can hold up to 5-6 matches in a week. And I just try to stay healthy. That is the most important by far, I think.

– You pulled off a fantastic match against Stefanos Tsitsipas at the US Open. Do you think these kinds of wins give you a shot in the arm and help your rise in your career and in your rankings?

– For sure, it does give me a lot of confidence that I can play against one of the best players in the world. And I showed to myself again that when I play my best tennis, I can compete with them. It did give me a huge confidence on top of that if I am healthy again, I can play good tennis.

– Could you just comment on that match you won against Roman Safiullin? The Russian tennis fans are pinning their hopes on that still young athlete?

– I think it was a good match as well. I was playing good tennis in the first set. I felt on the court really comfortable. I think he was not performing his best tennis in the first set, but increased his level in the second set and showed that he can play really well. He just needs to maintain this level and he is going to become better and better.

– How are feeling physically as you are in the final stages of the tournament? Do you feel these conditions really suit your game?

– I was always playing great here. I do think these conditions give me some more confidence and I really like to play here. I have no medical problems. I feel a bit uneasy with my shoulder but it’s nothing serious. I played here 6 sets in 4 days and that’s ok. I’m going to be ready for tomorrow for 100%. 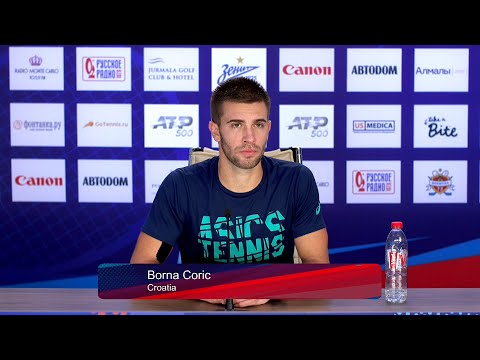