BORNA CORIC: “I AM HAPPY WITH THE LEVEL OF TENNIS I SHOWED TODAY”

– How important was it for you to win? How tough was it?

– It was really important for me to win. It’s obviously tricky to play against a player like Feliciano Lopez. The last time we played against each other was in Beijing in 2018 and I lost that match. So today’s match was a really tough one but I think that I played some good tennis. Speaking about the second set, I think that I was playing one of my best tennis. I was serving great. I was very happy with the way I played.

– Borna, you played in finals last year in St. Petersburg. What are your goals for this tournament?

– I didn’t set any goals to be honest. I never set any goals for the tournaments. My only goal is to win the next match. The goal is also to play good tennis just like I did today. The most important thing is to be healthy. Hopefully I can stay in the draw really long.

-The question is about the way you spent the quarantine. Did you get a chance to go out? How did you spend that time?

– I didn’t have a chance to go out at the beginning of the quarantine. I went in a house in the mountains. I spent there one month and a half. I was doing some physical work there. In the end of May we were allowed to go out so I started to practice more. Then we had the Adria Tour tournament and then the preparation for the US Open.

– What do you think about new “in and out” system instead of linesmen they applied this year?

– I think it’s very good. Obviously today happened something that’s never happened in my life, I made one or two foot-faults, I’m not sure. It was weird, but at the same time I believe the system. That\s what this machine does and I’m okay with it. I’m gonna need some time to get used to it, because it’s a little bit weird and I want to challenge the ball if it’s close. But I think it will be good for the future of tennis.

– You’ve done a lot of social media recently and you have joined Tik Tok recently as well. What prompted your decision to finally join this platform? How do you feel about social media in general in the way to connect to your fans, to show what you are doing when you are not at tournaments?

– What memories do you have from last year’s finals? How do you think you should play if God wants you to play with Medvedev again?

– My memories from that final are not very nice, to be honest. I got really kicked badly, I remember it was not fun for me at all. It was 6/0 or 6/1 or something like that. It was very tough. Obviously, he was in the best shape of his whole life and he was way too good. At the moment I don’t want to think about that final too much, I want to think about the whole tournament before that. That was very nice memories and I was playing some good tennis as well.

About my potential match against him – it’s still very far. He plays his first round tomorrow. We will see. Obviously, he is an unbelievable player and he has still an unbelievable season. I’m also looking forward to the match. Hopefully, if we are going to play, I can play better tennis and give more chances to myself. 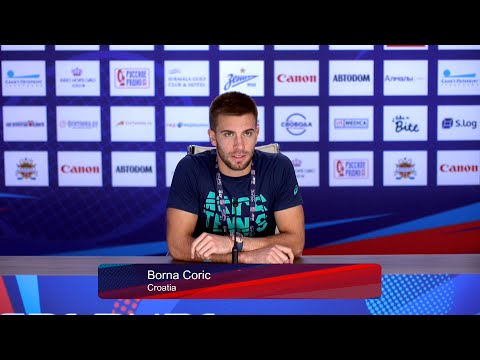