BORNA CORIC: “RUBLEV AND I LOOK FORWARD TO THE FINALS”

Milos Raonic was here just before you. He said there were key points in the match, when he missed an easy forehand from the center of the court and that must have been the turning point. Would you agree with that?

I don’t remember exactly that point, but definitely it was a kind of the match where two points will decide the match. I agree with him: in some points I got a little bit lucky, in some points I was playing brave as well. I think it was the key of the match, as well as the fact that I stayed very calm after the first set, which from his side was great. He was serving bombs and from my side I couldn’t find any rhythm.

Thank you very much for beating Raonic. What are you expectations from the finals against Andrey Rublev?

You are welcome (laughter). It’s going to be a very good match for sure. I would say that Andrey is in his best shape of his whole life now. He is playing absolutely unbelievable tennis. I was watching many of his matches over the last few months and I thought he was playing great. I’m actually really looking forward to the match. The last time we played I lost. It’s going to be a very interesting match and I’m really looking forward to it.

We have read in your Instagram your forecast, your statement: “I’m coming to St. Petersburg to make one more step”. You were in the finals last year and now you want to win the title. Does it happen often that you make this kind of prognosis and it comes true? Now you are in the finals again and exactly one more step is missing.

No, I wasn’t aiming for that, I didn’t make any prognosis. I’m not that kind of guy. It was just some fun on Instagram I would say and nothing more. Anyway, I think when you are coming to the tournament, you always want to win it, that was my main mentality. That’s the reason I posted it, but nothing more.

How did you manage to stay so mentally strong after losing one set?

I don’t think that there is any secret, to be honest. I think you need to decide that you are going to stay calm and need to accept the things that even if you are going to play well, someone can play better than you for a certain period of time. Especially against big servers like my last two opponents, you need to be even calmer and you need to except that sometimes you’re not going to touch the ball for 2-3 service game. You need to hope for the best then. I think that is my mentality coming to the matches. I knew it wasn’t going to be easy, there wouldn’t be much rhythm, but I think the main thing is to decide to stay calm and not to be angry at someone who is playing better than you.

Is there someone from your country who supports you here in St. Petersburg? Are there any Croat fans in the stands cheering up for you? We know that there are Croat football players in Russia, maybe they support you?

Mate Delic (a tennis player from Croatia) is my coach for this week. Iva Majoli supports me as well. She is the tournament assistant I think. She is from Croatia and a very good friend of mine. She has been here over the last 10 days with me. She always supports me and it means a lot for me. There are not so many Croat supporters here, but I feel that Russian fans cheered for me as well. It’s obviously that tomorrow they are not going to support me because I am going to play against a Russian player but I am okay with it. 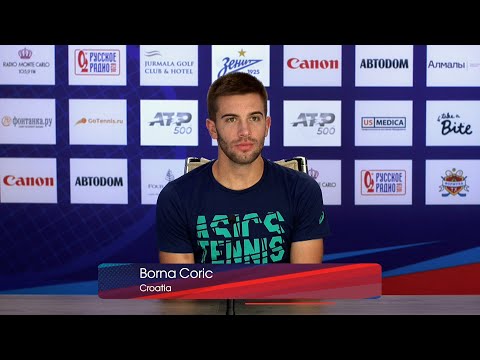 Borna Coric / press conference Saint Petersburg Open 2020 / 17.10
17.10.2020, 20:49 #SpbOpen2020#БорнаЧорич
More news
SHOTA MIRILASHVILI, CEO WATERGEN RUSSIA: «The exquisite elegance of tennis is associated in full harmony with our company!»
BOTIC VAN DE ZANDSCHULP: «I HOPE RUBLEV WILL REMEMBER ME NOW»
MARIN CILIC: «I STILL HAVE THE ENERGY FOR THE SEMIFINALS»
ANDREY RUBLEV: «BOTIC PLAYED A GREAT MATCH AND WAS AT HIS BEST WHEREAS I JUST PLAYED AS USUAL AND IT WASN’T ENOUGH TO WIN»
JAN-LENNARD STRUFF: “I’D LIKE TO FLY OR TO MOVE THROUGH SPACE ON FLICK”
Share with friends!