– The opening match was really tight. Can you, please, comment on the clash?

– I had a good start. I broke him at the very beginning of the match, after that I became nervous, I think it could be seen from aside.  So, I lost a game on my serve and when the score was 5/4 I composed myself and won the first set. He was playing really well in the second one. And in the third set we had an even fight but I rallied to beat him at the end.

– You are getting closer and closer to the Top 100. What does it mean for you? Do you have any plans to achieve this goal at this tournament?

– It was a long way to get the position I am holding now, there were injuries, there were ups and downs in my rankings. Since I was 18, I have been aiming to reach this goal. And now everything works well for me and I am finally about to reach the Top100!

– We were watching you play during the Challengers series and there you had the only loss – against Stan Wawrinka. It was a winning streak for you, were you disappointed when you lost in the quallies at Roland Garros?

– I was. I had a winning streak in the Czech Republic. And I was working hard for three months during the pandemic. And the Czech tournaments were held right after it. Perhaps, not everyone was in a good shape and I was. I played three rounds of quallies at Roland Garros, but my opponent played better in that match. So, I was definitely disappointed with the result.

– You have said you were practicing well during the pandemic. Have you changed something in the process?

– I went to America to play several exhibition matches. I think they helped me; I have been practicing before entering the Challengers. That is it.

– Did you change your mental game?

– I can say I have stopped thinking too much. I was just playing every point. And it helped me to win.

– Reaching the Top100 is your closest goal and what is the global one?

– Can you, please, tell us couple of words of where you started to play tennis and who was your first coach? And where you are training now and who is your coach?

– I was introduced to tennis in Israel. Then I moved from there when I was 3. My first coach was Vladimir Rabinovich. And now I have been practicing in Minsk (Belarus) for two years already. And my coach is Egor Yatsuk.

– To follow up on the previous question. In your previous interviews you were telling that you were practicing in Germany for couple of years, then you moved to Spain, to Barcelona. Can you compare these two academies? And why did you choose Minsk?

– When I was 21, I started to work in Germany in Halle. The coaches were good, but nothing worked for me, and the attitude was not good. I decided to change it and moved to Barcelona. But finally, I ended up in Minsk and it is the most comfortable place for me. The city is nice and all the conditions as well. I have my coach there with me and we have good relationships. I’ve known him for ages.

– If they invite me, I will play with great pleasure. 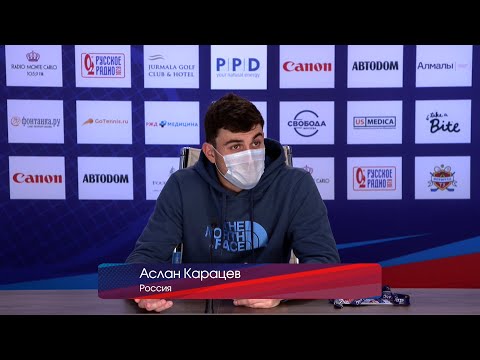