ANDREY RUBLEV: “IN THE MATCH AGAINST SHAPOVALOV WE WERE BOTH FIGHTING FOR THE INITIATIVE”

– Could you comment on the match? Did you notice the emotional outburst of your opponent, when Denis reacted to the actions of the public?

– The match turned out to be very difficult. It was very close and everything depended on every rally. I practically had no chance during his serve; he completely dominated in the first set. I showed emotions myself, so, of course, I noticed when he reacted to the audience. His reaction was understandable. In the first set, I behaved emotionally myself not towards the crowd, but towards myself. It was a game moment. In general, it was a very high level match. It was all about one or two points.

– Did the fact that you won the title in Hamburg and reached the finals in Paris help you psychologically? Did it give you confidence for this tournament?

– I haven’t even thought about it. Since the second half of last year, I played in the finals in Hamburg, and then my results went up; they were getting better and better. As they continue to improve, the level of my play grows as well as my confidence. Let’s see what happens next.

– It’s a technical and tactical question. How did you manage to find a weak point in his baseline game? At the beginning of the match, he hit excellent forehands and the backhands.

– I need to get rid of these emotional moments. I didn’t want that to and didn’t plan that. When I dropped my serve, I really wanted to hit the racket, but I stopped myself. I saw the bottle and hit it, but in the end it spilled, and I apologize for that.

– What is the explanation of the big amount of double faults Denis made in your opinion?

– He was leading 40-0 in that game, his first and second serve were very risky. He served very powerful, the speed was probably about 180 km / h, and the ball was out. He did the same on the second serve when the score was 40:15. The first two serves were risky. On the first serve the ball was long by a small margin, on the second it was long again, but it was a little more obvious. When the score was 40:30, I won a very important point, the score became “deuce”. It seems to me that when you win 40:0 on your serve, you feel confident, and then suddenly the score becomes “deuce”, at this moment you can get nervous. It was not easy psychologically (for Shapovalov),  I guess.

Would you say it was the key moment of the match?

– Of course, because after that I was u a break. He did not make double faults after that if I am not mistaken. I think that after that moment on till the end of the match he made  only one double fault. I think that in the first set he relaxed a little, he wanted to take risks, but he did not succeed in it. When the score became “deuce”, there was no room for error, and this is a little different.

– You have to play like this against tennis players like Denis. If you try to hold the ball in game, he will feel it and it is convenient for him, he will just make you run around the court, hit winners and go to the net. I’m not so good at defending on the court to try to play this game with him. I also have aggressive tennis, and this was my only tactic against him was: he who plays more aggressively takes the initiative. With some other tennis players who are probably more calm, who impose a slow pace I don’t need to play so aggressively. With them I can take time, I can wait longer for the convenient moment. That’s why I played so aggressively today against Denis.

– Are there many players on the tour who prefer to take the initiative? Who is also a difficult opponent to play against?

– There are many players who play aggressively. Dominic Thiem plays aggressively, Felix Auger-Aliassime as well. It’s so hard to make a list. Sam Querrey serves and wins in just two strokes. They might have not such an aggressive game but it’s different, it’s short. They hit the ball and see was it in or not. And you need to try to avoid errors. It’s difficult.

– Did this eventual victory at this home tournament get a special value for you now that the Kremlin Cup was cancelled?

– The victory at St. Petersburg Open 2020 has always been special. This is my home tournament regardless of the Kremlin Cup. I did not have such thoughts. Every tournament is important to me. I want to maximize my results at every tournament, to play as well as possible, especially if it is a home tournament. My attitude towards this tournament is not influenced in any way by whether there is a tournament in Moscow or not.

– How will you prepare for the match against Raonic in case you have to play with him in the St. Petersburg 2020 final? Will you watch videos on Youtube to guess his toss and directions of the serve?

– Let’s see who wins this match. If Raonic reaches the final, I will play roulette. You can’t really prepare for it. You have no room for error playing against such players: you can be at your best, show amazing tennis and still lose or you can feel the ball badly and still manage to win. You never know what will happen when you play against players like Raonic but I will do everything that depends on me.

If Borna reaches the final, I will need to show extremely good tennis against him, because Borna is a stubborn fighter, he fights for every ball. He moves around the court very well, plays great in defense and serves amazingly well. He’s probably one of the best on the tour who fights till the end. You need to show a very good level of tennis against him so that you have a chance to win.

– Does the support of the audience help or distract you when the audience starts to applaud right before the important point, especially when you are serving? Does it give you an extra energy or it’s just a distraction?

– To be honest I don’t know. Somehow I do not pay attention to it. I know this is a home tournament and most of the fans in the stands support me, they try to cheer me up and it helps a lot. If someone shouted something before the serve or during a rally I don’t think about it at all in that specific moment. 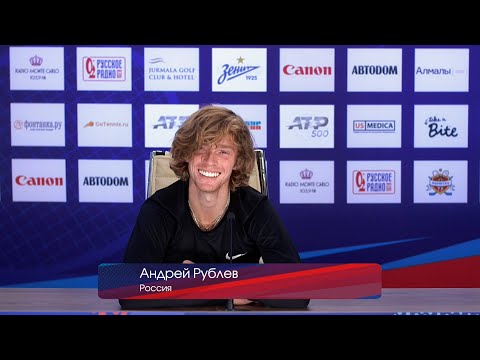