ANDREY RUBLEV: «BOTIC PLAYED A GREAT MATCH AND WAS AT HIS BEST WHEREAS I JUST PLAYED AS USUAL AND IT WASN’T ENOUGH TO WIN»

What was your opponent bothering you with in today’s match? Maybe with his serve, during rallies or with his return?

I wouldn’t say he bothered me with anything in particular. Botic just played a great match and was at his best whereas I just played as usual and it wasn’t enough to win. I had some chances, I was even up with a break, but he played better on key points.

We have the impression that Botic learned to read your serve during the match and where you are going to attack next, is that right?

I don’t think he was «reading» anything. My serve percentage was low overall, there was no consistency. With this type of serve it has hard to play at the level that we are now.

Did the result of the 2017 match when you lost to the Dutch loom over you?

No, I did not even know about it until you mentioned it.

Did you talk to Evgeny Donskoy before this match, because Botic had also beaten him as well?

What do you think about Botic’s perspectives? He is ranked 69th in the world now and he is 26-year old, what can he accomplish in the future?

I don’t know, it is hard to make assumptions here, because he has a fully developed game style, there is nothing to add. He is an accomplished player. It will only depend now on the results of his approach. It’s not one od those cases when a player is ranked 60th and he should be ranked higher because he has potential. He has a solid backhand, a good forehand with which he is opening up the court, a strong enough and tough serve, he is moving well and defending well. Now is his best season.

There are no Russians left in the draw and we have often wondered about the Davis Cup. Karen Khachanov and Aslan Karatsev both were not at their best here at this tournament and were both knocked out, now you’ve just lost…  Will you all be able to recover physically and emotionally to reach your best shape before the Davis Cup?

I think so, for sure. These are completely different emotions, different tension, there is a team. You know that even if you lose a match, nothing is over. We are together and we support each other. The guys will rest up some more and it is all going to be great.

What are your plans for the rest of the season? What tournaments are you going to play? What results are you expecting?

Paris and Turin are the last two tournaments this season for me. I wish I would play better, because I want to feel like a great player again and play tough matches on the same level against other top players. We will see how it goes.

Is psychological weariness taking its toll on you because you have to always keep yourself focused and concentrated on the game, or this match just didn’t go your way, period?

Of course, one feels weariness towards the end of the season. Besides, I am playing every day. But right now, thank God, there is some time left – especially before Turin to train calmly and analyze everything. We will see. The most important thing now is showing my best Turin (ATP year end tournament). That is why I will do everything in my power to be psychologically and physically prepared for the ATP Finals. 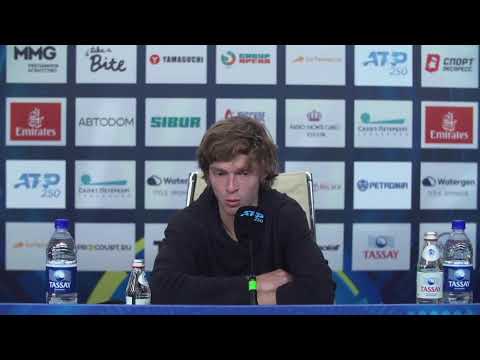 Press-conference with Andrey Rublev, St. Petersburg Open 2021, 29.10
29.10.2021, 22:19 #spbopen2021
More news
SHOTA MIRILASHVILI, CEO WATERGEN RUSSIA: «The exquisite elegance of tennis is associated in full harmony with our company!»
BOTIC VAN DE ZANDSCHULP: «I HOPE RUBLEV WILL REMEMBER ME NOW»
MARIN CILIC: «I STILL HAVE THE ENERGY FOR THE SEMIFINALS»
ANDREY RUBLEV: «BOTIC PLAYED A GREAT MATCH AND WAS AT HIS BEST WHEREAS I JUST PLAYED AS USUAL AND IT WASN’T ENOUGH TO WIN»
JAN-LENNARD STRUFF: “I’D LIKE TO FLY OR TO MOVE THROUGH SPACE ON FLICK”
Share with friends!