ANDREY RUBLEV: “I AM GLAD I PULLED OFF THIS CONFIDENT WIN”

— Is there a potential danger in such easy matches? Can it relax, give a false idea of the unnecessary confidence, or there is no danger and the bigger the gap in the score, the better?

— Sometime it happens that you win the first set easily enough against a player with a good level and a very good game, it starts to seem that something is wrong. Sometimes such an easy first set relaxes, and then the opponent starts to play better in the second set and imposes a fight on you. At such moments, the score can become very different. I am glad that today I managed to pull off a confident win without any problems.

— You are going to meet with the winner of the match Denis Shapovalov vs Stan Wawrinka. You know both of them well, which of them would you rather play against tomorrow?

— Yes, I know both of them well. I have never defeated Denis (their head-to-head 2-1, Rublev had one victory at the Next Gen ATP Finals), and I won against Stan once, but it was a very difficult match. Anyway, tomorrow I will face a difficult opponent, regardless of who it will be – Denis or Stan. Let’s see who of them will win.

— You have arrived at St. Petersburg Open after three full weeks of tournament. Besides, you also had a very tough match yesterday. How do you feel physically? Do you feel tired or do you manage to recover quickly?

— In fact, I feel tired, especially after yesterday’s match. I’m glad that today I managed to win confidently, because now there is time to recover and prepare for tomorrow’s match. Hopefully tomorrow I will be able to enter the court with renewed vigor.

— How do you recover?

— My physio usually goes to big tournaments with me. When he is with me, the recovery process is easier. I recover quickly and easily with the physio. He’s not with me in St. Petersburg now, so it’s harder for me to recover.

— Yesterday you participated in an online meeting with fans within the “Virtual Stand” at the St. Petersburg Open. Do you like this format of communication with fans?

— Yesterday I didn’t communicate with the fans directly, but via the hosts. They asked me questions from the fans who attended this event, but it wasn’t direct communication with fans.

— Yesterday there was a press-conference with Reilly Opelka. He said that you are very good friends and, in general, had many flattering words to say about you. What can you say about Reilly and his sensational victory over Daniil Medvedev?

— Reilly and I have known each other since childhood. We met when I first came to America to play in juniors. The year was probably 2008. We played against each other once. He didn’t have such a strong serve as he has now, and he was much shorter back then. The way he plays with his physique, he can beat everyone. Daniil was out of luck with him as an opponent, because it is very difficult to play against such players. You can play incredibly well, be in  great shape and still lose because his serve is incredible.

— How does the fact that you are getting closer to the Nitto ATP Finals in London affect you? Does this fact motivate you to play better?

— To be honest, I didn’t even think about it. I do not check the information about how many points I need to get to reach the ATP Finals. Denis Shapovalov has probably the same amount of points and if he outplays me, then he will have more chances to reach the ATP Finals. I don’t even think about it. If I can show good result and get to London, then I will be happy. If suddenly I do not get to London, then it’s okay. I had no idea that I could get so close to it this year, so nothing really will change for me if I don’t get there.

— The Russian national tennis team has three top: Rublev, Khachanov and Medvedev. The fourth member of the national team is Evgeny Donskoy. He is a substitute. Do you need a fourth player on the team, and what can you say, for example, about Aslan Karatsev who is still young and ishaving a good season this year?

— First of all, there can be five players on the national team. There were three of us so we could have two players, in any case. Secondly, we already have three good players who playing in singles: Daniil, Karen and me. Other teams have 2 singles players and 2 players in doubles. Unfortunately we do not have players who play in doubles, so if we take the fourth and fifth players from singles it means that these players are going to be sit on the bench while the 3 top players will be on the court playing singles. Even if I can’t or Daniil can’t play, then there is also Karen. If Karen can’t, then Danya or me can. Now the format of team matches has been changed: only 2 singles matches and one in doubles. Moreover, Evgeny is already as one from us, we already have strong and friendly relationships between the four of us. We have an atmosphere that helps to be positive. This helps the team a lot. There are seats on the team, because there were only three of us. We could take two players.

— Roman Safiullin, who won the junior Grand Slam in Australia, performed at St. Petersburg Open 2020. You know him well. What do you think prevents him from rising in the rankings.

—We are very good friends with Roman. He is a very good player and a very good person. I know him since we were children. We have been always in one team, played together at juniors tournaments. He is a hard-worker and he loves tennis very much. I believe that everything will be fine with him. He has small psychological problems: a lack of self-confidence. I think it will come as he plays more matches. He has already won one match in the main draw here in St. Petersburg. I think it will boost his confidence and hopefully his results will improve. He has everything to play on a high level but he just needs to believe in himself. 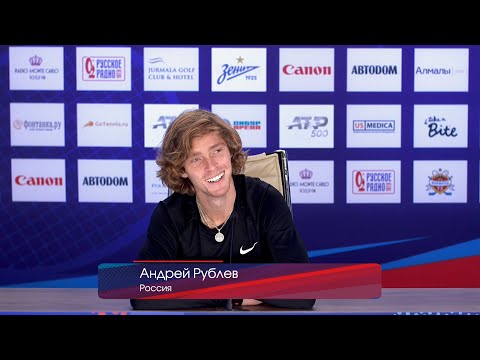