Andrey Rublev: “I won a match in Russia at last!”

– What do you think of Ilya Ivashka’s game style? Are your game styles similar in terms of their physicality, aggressiveness?

– I’ve known Ilya for a long time. We’ve been training together for quite some time and I would not say we play in a similar manner. It’s a bit different: he plays aggressively, but I would not say explosively. His impact power is more or less the same from both hands, he hits the ball; equally strong and with high accuracy. But I would not say he suddenly begins to play faster or slower while hitting the ball hard, he is quite steady. It does not seem like he slows down, but there is no an explosive speed either. In some moments I start playing softer while he hits the ball hard both from his backhand his forehand. My forehand is obviously stronger, so the ball is flying faster than from the backhand. Therefore, I would probably compare my game style to some other players’ game rather than comparing it to Ivashka.

– The following question then: Ilya’s play style is convenient for you?

– I have not figured out yet what opponents are convenient for me (laughter). But we’ve been training for a very long time together. He knows me very well just like I know him. Both of us knew what the other would do during the game against the opponent.

– Andrey, today is a big day for – you won an ATP match in Russia. So why haven’t you succeeded at home before? Have you become a slightly different tennis player now?

– In fact, I didn’t think of it before, I was just too young. I had no a sufficient level of play. And as I grew older I began to feel nervous over the fact I can’t win (in Russia) yet again it began to have an impact on me. But finally it worked out. Although I was nervous today and something didn’t quite work well for me today, but I am certainly glad I won.

– When you were down in the third set, didn’t you think – oh well, maybe this is the end again?

– Previously it seemed that you bet on one super powerful shot, and now you keep the ball in play longer, right?

– I simply did not have enough physical ability to run and endure before, therefore I had no choice, I had to play one or two shots, because I had a higher speed and there was nothing left but to go and take risks. In case it didn’t work out, I usually lost very quickly. And if I felt the ball well, then a fight ensued, and I would win. Now, finally I have become much more resilient, I can run more. I don’t have to take risks anymore , I don’t go for just one or three shots, but now I can withstand long rallies. I know that I’m good enough to keep the ball in play without making errors.

– How do you evaluate your shape now, in this phase of the season? You played great in North America and speaking generally played pretty well at the US Open. Are you up or down now?

– I would say, now I am quite confident mentally. And speaking of the game itself, I just stopped thinking about the level I am at right now at. It all changes day by day: one day you play well, the other a little worse, and a lot depends on your opponent. Mentally – yes, I became much calmer and more confident and that has helped even today. And in terms of the game – we’ll see. The main thing for me is to do the maximum I can. There will be ups and down, and it is normal.

– Did you like the challenge event they organized here – tennis players vs footballers – at Gazprom Arena?

– That was really cool. I really liked it, I still have very positive emotions from that event, I really appreciated that. I would love to do something else like that again and I would like to see more of such creative initiatives, because it was really cool. 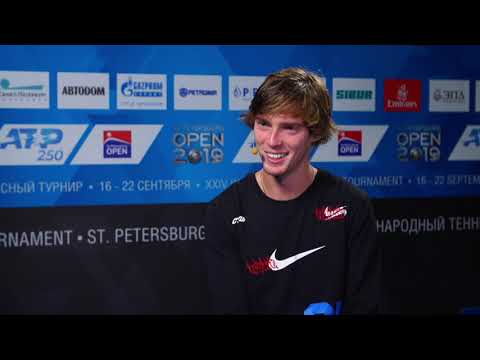